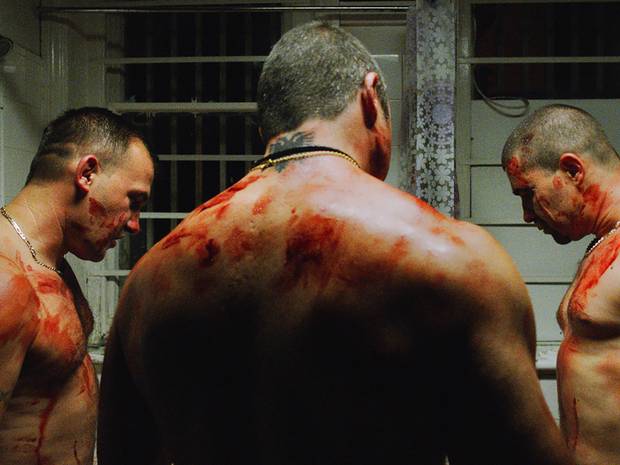 Gone are the days of good triumphing over all. Leave that to Hollywood. Gerard Johnson’s Hyena instead is set in a world where all men are evil and all women are victims. This bleak outlook acts as the motivating factor to every choice Hyena makes. Though self-described in the press-kit as equal parts grit and neon, it might just as well trumpet equal parts gore and cocaine (without any of the Quentin Tarantino wit). The film opens in West London as a special task force raid a night club. In a hazy, blue-lit, slow motion sequence, the five pot-bellied police officers brutally beat club goers with billy clubs and a fire hydrant while dance music plays on the soundtrack. They then retreat to a pub where they indulge in the spoils of their raid and party till the sun comes up. London’s finest.

The task force handles drug trafficking among the gangs in the area. Lead by Michael Logan, an excellent cop with a bad drug habit and questionable loyalties (played by Peter Fernando), the team of strung out buffoons strikes deals on both sides of the law, looking out for only themselves. Early on we learn that Logan has a good amount of money invested in a new drug route through Turkey but the plan goes awry when a pair of Albanian brothers hack Logan’s contact to pieces. In the wake of the murder, Logan’s carefully balanced lifestyle begins to fall apart and he is forced to improvise in order to save his life.

The Albanian dismemberment scene is only the beginning to the hardcore violence in Hyena. Later, the same gang puts the Saw films to shame in a horrifying human-filet job. Don’t expect any relief from Johnson’s true blue nihilism, the only comedy comes from the Logan’s cronies who like to get high and cover themselves in condiments from time to time. Overall, the film is unrelenting in its message that the climate of violence and corruption in the police system won’t improve any time soon.

In terms of the camerawork, grit and neon are perfect descriptors. Benjamin Kracun’s cinematography is reminiscent of Drive. The lens does not shy away from bold, night clubby lighting and grimy details that captures the very essence of the West London drug trade. Fernando’s performance is the best thing in the film, however, bringing nuance and emotional conflict to a character who might otherwise have been so repugnant as to turn one off to the film entirely. Hyena is a bold film that holds true to its vision, even at the cost of viewership. It takes a steel stomach to watch but is ultimately important to the history of its genre.