March 31, 2016
Film
Interview: Director Tom Moore on His Lifelong Love of Trapeze, and the Legacy of ‘Grease’ 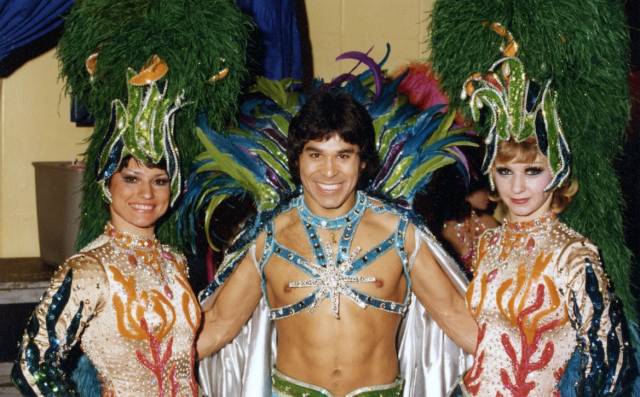 The history of the Gaona family seems almost invented for the movies, their legacy in the circus arts goes all the way back to the 19th century, when they were part of the Circo Gaona y León in Mexico, and their unique name pops up in some of the most iconic circuses of the twentieth century including the Bertram Mills Circus and Ringling Bros. and Barnum & Bailey, and yet their contributions to the artform of trapeze are largely unknown except for people versed in that world. Leave it to director Tom Moore to bring their vibrant legacy to life in The Flight Fantastic, his first foray into nonfiction film dedicated not only to the Flying Gaonas, but to trapeze in genral.

The Tony-nominated director, who has also worked on film and television speaks kindly about the spark he saw in the Gaonas, whose warmth and kindness appealed to him. “The generosity of spirit and in helping other people, I haven’t encountered in other artform” he expressed when we spoke about the documentary. You can detect the child-like passion with which Mr. Moore speaks about trapeze, and wanting to share the film with the world. Having proven his knack for directing plays and musicals on Broadway, Moore went on to Hollywood where he became a very successful television and film director, with projects ranging from episodes of Ally McBeal, to the film adaptation of ‘night Mother, which he’d originally directed on Broadway. In The Flight Fantastic, we find him at his most playful, interspersing the history of the Gaonas, with anecdotes about loving cinema and the power of art in healing. It’s no surprise that the director was so fascinated by the skills of “flying” humans, since for a man, who like Mr. Moore, seems to have done it all, sky must be the limit...

When did you first encounter the Gaona family?

My fantasy of trapeze started as a kid when I used to go to the circus, I loved the flying trapeze act and fantasized about being able to do that. It was all put away as I pursued my life and my career, and various things in my life. I had gone through some things and wanted a complete change of pace, so I went to a Club Med, and people told me I would hate it, but I had a wonderful time because they had a flying trapeze there ran by a man named Bob Christians. I tried the trapeze and it changed my life, upon returning to Los Angeles I started researching the famous trapeze artists, and in San Francisco I found that Richie Gaona was in Los Angeles, and because he was such a legend no one would give me his number, because they said he didn’t work with amateurs (laughs). Eventually I got in touch with him and I used everything in my power to make sure he would coach me.

You don’t talk about yourself in the movie, and you don’t appear in it either, but now that you mention wanting to be a trapeze artist as a kid, I’m wrong, you are in the movie because it’s all about your discovery of trapeze.

That is such a perceptive thing to say, when people ask me if I’m in the movie, I tell them “the movie is all about me, but I’m not in a single frame”. When we were editing one of the things that kept me on track was discussing what had brought me there, and the joy I felt. The goal of the movie was to capture the extraordinary exhilaration and thrill of this film, which few people outside the world knew about.

I found it beautiful how the Gaonas themselves were inspired by the movie Trapeze.

It totally did, the movie inspired me as well, I’m old enough that I had seen that and The Greatest Show on Earth, which has a flying artist called “The Great Sebastian” who I wanted to be (laughs), and Trapeze has Burt Lancaster who ironically enough, I’d worked with him before I discovered trapeze, I did a play with him and Kirk Douglas. It kills me that I discovered the trapeze so long after because I didn’t get to talk about trapeze with him. If you go online and discover other people who have discovered trapeze you’ll see the joy.

We are seeing Broadway shows like Pippin incorporate circus arts, which in the past have been looked down on by “serious artists”.

Right, when we were trying to get grants we obviously mentioned the thrills of the trapeze, but another point we made was that these people were some of the greatest artists and athletes performing in the world, and they were for the most part unknown. The circus has changed so much, it’s no longer about the individual artist, Cirque du Soleil is fantastic, but it’s all about the concept, no one can tell who the individuals are most of the time because of the costumes. I believed I could combine my skills and passions to reintroduce these people to the world. I think the circus arts have something so magnificent in their story, which is why I think the movie should be seen on the big screen. Seeing it for the first time on the big screen, with these acts appearing larger than life, I was thrown back in my seat.

You mentioned Pippin, which I liked enormously, Diane Paulus did a wonderful show. I’ve always hated concepts that seem applied on top of things, but what she did was work through the whole thing to make sure the concept of the circus was used in each individual scene. It obviously comes to fruition the most when Berthe is up on the trapeze, because it’s what I want to show in the movie, it’s recapturing something joyful from childhood at a very late stage in your life. 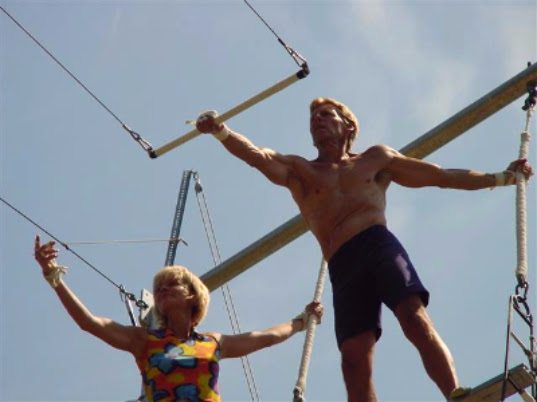 You’ve directed film, television and theatre. There is something terrifying in the fraction of a second as we see the trapeze artists go from swing to swing. This is very metaphysical but what do you think is the appeal of the suspense there?

Danger! It’s what keeps any art piece alive, really, in any medium. I’m not talking about thrills that might end in disaster, like a reality show, but that moment even in the stage, will they be able to get there? Will they be able to take me there? In the circus of course it’s magnified, in the film we try to show how difficult it is, I’ve seen videos of many wonderful trapeze acts, but you have to know how difficult it is to make it special. On film it depends on where you shoot, you can show how tall it is in perspective for instance, it makes it electric. A lot of people think the film is about The Flying Wallendas, who were a high wire act, not a trapeze act, high wire act doesn’t attract me because there is no net underneath. In trapeze, if you fall it’s no immediate death, so it adds a level of artistry and beautiful, with that said if you don’t know how to land on the net, that can kill you. Just so you know, the only way to land on the net is on your back. One of the things mentioned in trapeze philosophy is even how to land with grace.

Speaking of that, I had never heard of Alfredo Codona and his tragedy. It’s like a classic melodrama!

That legend of Alfredo Codona is known by anyone who flies seriously, he’s like the patron saint. Because of his grace and beauty he is the one everybody remembers, the tragedy of his life is unforgettable. When we were adding that piece in the film, we had everyone talk about Codona, but when I got in the editing room I realized having people talk about it wasn’t eloquent enough, so we decided to tell it like a silent film. No one can tell his story as well as it can be told.

You directed Grease on Broadway, and in January we saw a live television production, which in a way encompassed your work in a way, the musical for obvious reasons and your love of thrills. Did you see that production?

I did, I give it one thousand percent in terms of production scale, it was extraordinarily brave! It took two really talented directors to do it, Thomas Kail who of course directed Hamilton, and an exceptional television director, and they were working in tandem, and I thought they succeeded brilliantly. What Grease has become, and it has nothing to do with that production, but with every revival, is that every production gets further and further away from the grit of the original. There’s nothing wrong with that, it’s just what happens. I quite like the movie, Allan Carr’s brilliant concept of making the 70s looks nostalgically at the 50s was very successful. Grease will go on forever, and there is an obvious thrill in having been there at the beginning and having listened to this music, but it becomes something different with each incarnation, it’s more and more of a cartoon. Nothing wrong with that, but it’s not what we envisioned originally, the show survives because everyone identifies with the characters. There’s a thrill about something like this getting done over and over though, you can be in Egypt and suddenly there is the music playing as muzak, and you have the joy of having been there first.

Did making The Flight Fantastic make you want to go back to Broadway and maybe make a show about the Gaonas?

The answer to that specifically is no, listen if a project came up I’d be glad to go back to Broadway, there is nothing like New York or New York success, but it’s interesting that this movie came out of several ideas I’d been discussing with other people. One of the ideas was to make something about the aerial arts seen through myths, like the Greek gods or something like that, but it’s hard to compete with Cirque du Soleil. Then I discussed maybe making a fiction film, but that didn’t come to anything, so that led to the documentary. Making any documentary is extremely difficult, like Louis C.K. said at the Academy Awards “this is the only award that means anything because the storytellers in the category aren’t making a dime out of it” he said “this award is going home in a Honda Civic” (laughs), documentaries are hard to make, it’s hard to get them seen but it was a fascinating experience after a life in fiction. I don’t need to do more, but it was fascinating.

The Flight Fantastic opens in theaters on April 1.