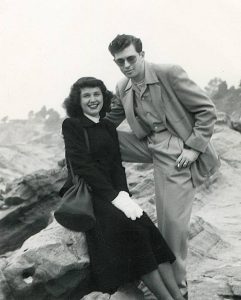 Daniel Raim’s Harold and Lillian: A Hollywood Love Story is a delightful film about two of the most influential figures in cinema history, most people have never heard about. Throughout the studio system era, Harold Michelson’s storyboards helped envision some of the most iconic movies of all time including Ben-Hur and The Ten Commandments. His wife Lillian became one of the most essential film researchers, her famed library becoming a creative nest of sorts for people one would never expect (part of the film’s pleasures is “discovering” all the projects and people they influenced). Informative, entertaining, and wildly romantic, Harold and Lillian: A Hollywood Love Story is Raim’s final chapter in a trilogy he’s dedicated to behind the scenes of classic Hollywood. As the film made its USA debut we talked to Mr. Raim about his work, the importance of storyboards and how the disappearance of research libraries can affect creativity.

It’s Oscar season, so I’m curious, do you think the attention you brought Robert Boyle with The Man on Lincoln’s Nose, is what made the Academy give him an Honorary Oscar in 2008?

(Laughs) Great question, but it’s hard to say. There’s no question he definitely deserved the Honorary Academy Award, with that being said I hope the film played a part in this, I know there was a lot of support for him to get the Oscar.

Most films about films are about actors, or directors, but all your three films have been about people whose work “we’re not supposed to notice”, can you comment on following this pattern all the way through to Harold and Lillian: A Hollywood Love Story?

I hope all three films work together in unison, in a way they don’t only compliment each other as a trilogy, but also all films pay tribute to people I dearly respect and who have been mentors to me in one way or another. Their stories are not only important to preserve for future generations, but also their ideas, techniques and passion. In Harold and Lillian, for the first time there is a film that really talks about how films are pre-visualized, how they’re storyboarded and what it means to tell a story visually.

The film highlights how storyboards besides being important for practical purposes, are also art in themselves. If we see sketches made by great artists in museums, why don’t we see storyboards too?

That’s a great question. I imagine shortly we’ll see them at The Academy Museum, but that’s dedicated to cinema. Recently LACMA did a Stanley Kubrick exhibit, which had a lot of storyboards, but generally speaking, the storyboards as incredible as they are, are a tool. As Harold says in the film “they’re not interested in my style, they’re interested in my ideas”. You make a great point, we see published screenplays in bookstores, but we don’t see storyboards, part of it is because a lot of them were destroyed. Harold had the foresight to preserve and hold on to a lot of his originals, like The Birds, The Graduate and thousands he did for Cecil B. de Mille in The Ten Commandments. 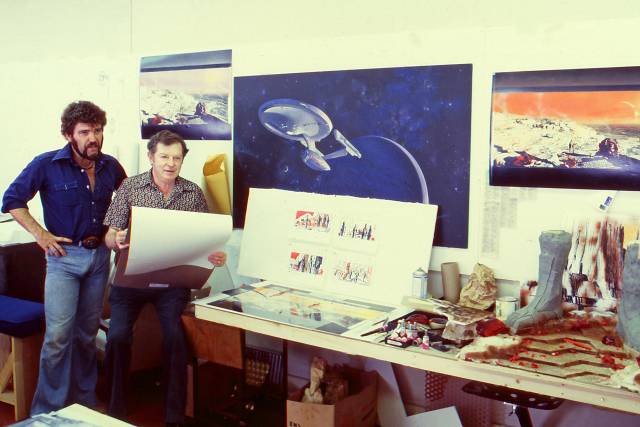 I got a sense of Harold as someone who didn’t really know how much he actually had contributed to cinema. Would you say that he was modest or not conscious of the impact his work had? I mean, if I’d come up with the “leg shot” from The Graduate, I would talk about it all day long.

(Laughs) I think you’re right, both he and Lillian were pretty modest, they weren’t looking for the spotlight. They knew they were beloved within the industry that they were sought out in. The difference between a storyboard and a comic book too for example, is that a storyboard tells us what we’re going to see through the camera lens. Harold had the script, Lillian’s research material that evokes the period the film takes place in, sometimes Harold wouldn’t even have a script like when he worked for Hitchcock. He would storyboard just based on conversations he and Hitchcock had. There were usually two scripts in his films, one with the dialogues and one with the storyboards. It would be lovely to publish those storyboards.

One can only hope! I thought it was so powerful when Lillian explained how the fact that Harold had flied in bombers during WWII gave him a perspective that helped the way he saw the world and eventually how he did his storyboards. You were in the Israeli army, and I’ve always found all these very interesting parallels that come from people who were in the military and eventually do movies. In Something’s Gonna Live even you mention how Harold and so many other people he worked with knew each other from before the war. Would you say this is partly what drew you to tell their stories?

Absolutely, I did serve as a documentary cameraman and filmmaker in the Israeli Defense Forces for three years and that’s where I learned, self taught at the time, about the power of storytelling through a camera. When I met Robert Boyle at the AFI Conservatory literally within two weeks of finishing my service, he was 90 at the time and was head of the Production Design Department at AFI, so I said to myself this is the guy I wanna learn from. He’d been a WWII cameraman and we bonded over that.

The parallel I think is most obvious about film and the military is that they’re both about ascending in rank. People like Robert Wise who started off as an editor and eventually won Oscars for directing…

Right, in Harold’s case, as a WWII bombardier navigator, looking through the sight which was very accurate and meant to cause less civilian casualties, that’s where he got a sense of geography and space, an idea of time and space that lent itself to what Harold did fundamentally as a storyboard artist. There were two things going on in his work, first his ideas, and what he brought to storytelling, the leg in The Graduate, which just happened to be one of among hundreds of drawings he’d done. The other thing going on is the technique of knowing what lens to use, the height of the camera, he could accurately depict through his storyboard, pre-computers, what the camera would see exactly. 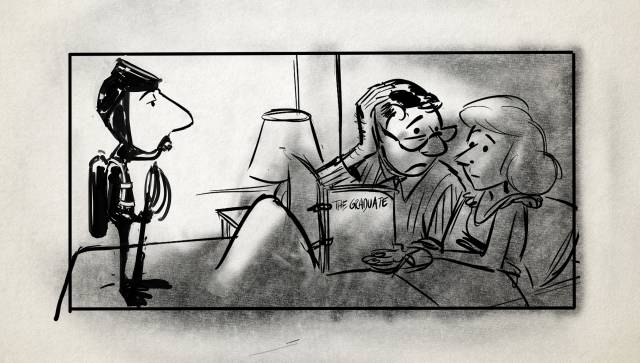 That’s amazing, Harold and Lillian were like a supercomputer together. Before asking you about her work, let me ask you about Harold’s position in the auteur theory, someone like Harold could never be considered an auteur, because his work was extremely varied, and I personally think that’s where his genius is. Do you think the auteur theory invalidates the great work of artists like Harold?

Part of the auteur theory is that these auteurs were incredibly collaborative, and one of the things that shows up over and over about working with the greatest of auteurs, Alfred Hitchcock, is that he was extremely collaborative and would listen to ideas from his driver, I’m not kidding. Going back to Harold, in my opinion he was an important voice in the history of cinema that started in the Golden Age of the studio system and made it all the way to New Hollywood. I learned making the film that it was very rare for someone to transition from the studio system to New Hollywood and be as valued. He did storyboards for de Mille, worked in The Graduate and eventually got an Academy Award nomination for his production design in Star Trek: The Motion Picture, where he visualized the sets and the storyboard. I hope this film will introduce film lovers and filmmakers to his work.

Lillian’s work is impressive and it made me wonder what her thoughts were on the impending digitalization of the world. Did you talk to her about the idea of having libraries vanish and computers taking over?

She’s not against the digital tools. In addition to having this incredible research library that was connected to hundreds of American classic movies, she told stories about how research libraries in every studio would become the hub where the creativity was happening, people would be rubbing elbows and getting inspiration from something on the back of the book, or a piece of paper. Definitely there’s a loss there in terms of the community aspect. But there was also Lillian herself, her tenacity, personality and her ability to find information not only through books but through people on both sides of the law. She’s such a fascinating person to do a film on!

As much as I loved the film, I’m sure you’ve been asked to turn their film into a fiction biopic. Any thoughts on that?

You know, I haven’t given thought to that, I’m focusing my energy on releasing this one first.

For more information on Harold and Lillian: A Hollywood Love Story visit their official website or their Facebook page.