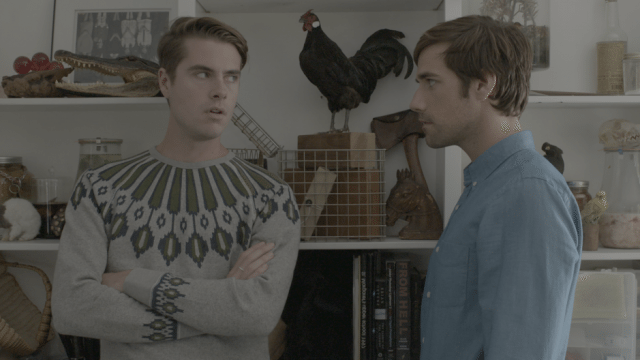 In You’re Killing Me, absent minded internet celebrity George (Jeffery Self) falls for the handsome but mysterious Joe (Matthew McKelligon) who seems devoted to him to the point that he would kill to spend the rest of his life together. “Kill” is the key word given that Joe happens to be a serial killer. Self who co-wrote the screenplay with director Jim Hansen, riffs on the vapid culture of Los Angeles and even pokes fun at himself, which makes for a meta film that’s hilarious but also quite thought provoking. Hansen and Self have collaborated on other projects like the hilarious Paragon School for Girls, and their very unique brand of sense of humor makes for a refreshing film. I had the opportunity to speak to both of them about writing the film together, California culture, serial killers they love, and making “post-gay” movies.

How was it to write this movie together?

Jeffery: It was great! Jim and I are really good friends, we wanted to write a movie together for our mutual friends, so that we could all make something together. It was easy to write with our friends’ voices in our heads, laughing around imagining how they’d say these things in these situations.

Jim: I concur. We got to combine both our loves, my love of horror movies and genre, and his love of romantic comedies, we mashed them together.

It was great to see all these fantastic comedians like Drew Droege show up! It was more exciting for me than The Avengers…

Jeffery: That’s what we want! This is the alt-queer comedy Avengers, that should be the tagline.

Jeffery: Oh yeah, the only person who’s not self-absorbed in the movie is the actual serial killer and you could argue that he’s the only good person in the movie, even if he’s killing all these people. That’s obviously an exaggerated version of the people we know in LA, but there are seeds based in the world that we live in, and also myself.

Did making the film make you go back and think about odd or quirky things about people you dated in the past? Maybe they were killers too?

Jeffery: I didn’t really have anything like that, but I think Jim and I both are fascinated by real life serial killers in general. Jim definitely is very versed in horror movies and true crime.

Jim: We definitely talked about Charles Manson and the idea of the charismatic killer, there’s the idea of the sexuality of someone who likes violence, which can be alluring and repulsive at the same time. Matthew McKelligon is the same way, he’s obsessed.

Jeffery: Matthew knows everything about serial killers! He’ll be like “oh this is the ditch where those boys were murdered by so and so”, it’s a little creepy. 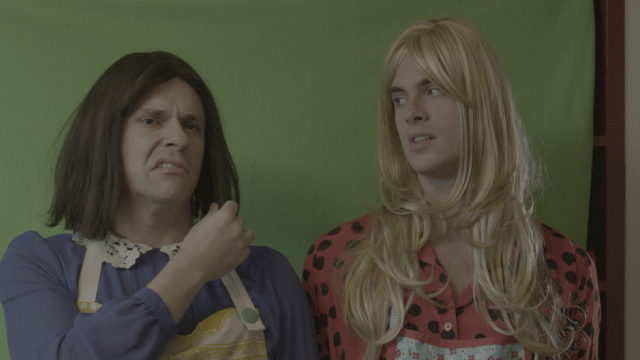 Apologies for going all Barbara Walters on you, but were you interested on making a commentary on the lack of importance many people put on mental health?

Jeffery: I don’t know if it was that per se, but ultimately what we’re trying to say more than anything is that it’s about a world where no one’s listening. If there’s a deeper, unspecified message in the movie it’s a comment on that, on the fact that we’re so glued on documenting our lives and putting them out there, and getting people to retweet it and like it and all that crap, that we don’t listen. So when someone tells you “I’m a serial killer”, or “I have a problem”, we don’t hear them because the world is built as a place where we document, rather than listen.

Jim: Not even the doctor listens to Joe in our film, he’s trying to find help but everyone else is just focusing on their own stories.

The film defies genre classifications and it made me think of how we’re also living in a post-gender world, where “gay” and “straight” are pretty old fashioned labels. Were you interested in making post-genre movies too?

Jeffery: We definitely wanted to make a movie that wasn’t just a horror movie or just a comedy, or an indie gay movie...we wanted to make something that told the story we wanted to tell in whatever tone and style was appropriate. So the movie does go back and forth between genres, which goes back to what Jim was saying about the film combining our worlds, he comes from a world of fantasy and horror, I come from a world of Julia Roberts rom-coms. The movie has gay characters but it’s not about them being gay, we wanted to make a post-gay movie, I mean we show gay people as pretty terrible for the most part, but they’re also funny.

Jeffery: That’s right! I forgot about that! I totally forgot Matthew had done something with Franco, I’ll have to catch up with him…I do think James is wonderful and I would love to see him in his underwear again. 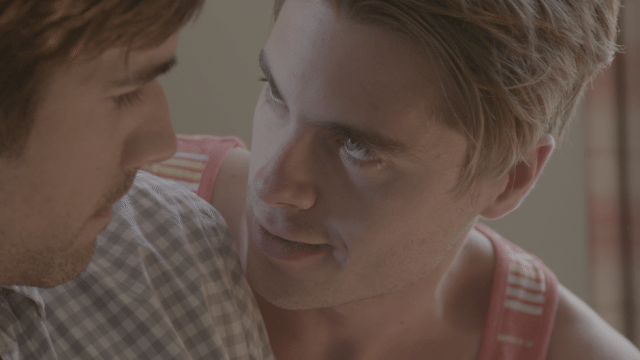 Can you pick your favorite movie serial killers? Or real ones too...

Jeffery: I’m very into Manson, I got really into him when I moved to LA because he’s so California, he represents such a specific moment here, and he was hot and sexy and interesting. I’m very into the evil beauty of him, as far as movie serial killers I don’t know…

Jim: Mine is maybe Carrie, she may be more of a spree killer, because she does all her killings at once, but I get it, I get why she did that, she’d had enough of those people. I love her. I also love the killer from Dressed to Kill, but I don’t wanna give away who the killer is, because that movie is so good.

Jeffery: I also love Amanda Plummer in So I Married an Axe Murderer…

What serial killer would you go out on a date with?

Jeffery: I just read the memoir of the woman who was best friends with Ted Bundy, she’s a true crime writer and the book is called The Stranger Beside Me, and having read that I’d say him cause he seems charming and sexy.

Jim: I’m gonna pick Mickey from Natural Born Killers, because he seems fun, and maybe Juliette Lewis would be there and that’s always good.