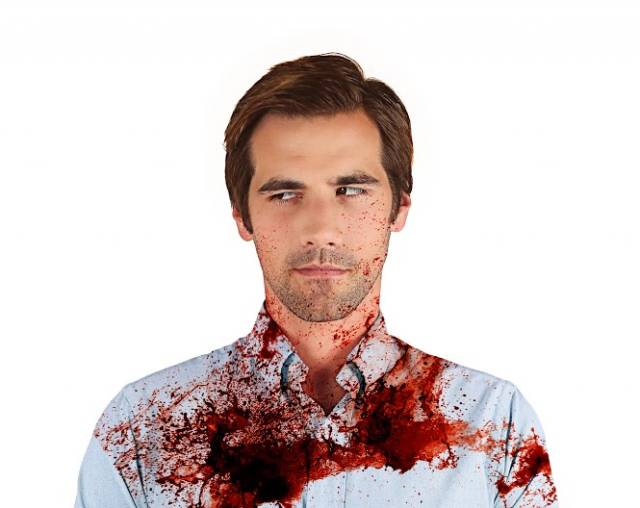 Imagine you find the perfect guy to date, he’s handsome, attentive, funny and pretty much seems to have it all, but he also happens to be a serial killer. That is what happens in You’re Killing Me, a horror/rom-com hybrid starring Matthew McKelligon as Joe, the killer who sweeps absent minded George (Jeffery Self) off his feet. It helps Joe’s case, that McKelligon is such a charmer, which is why you sometimes even feel like rooting for him. McKelligon makes for an unorthodox movie romantic hero, as his character shows sometimes you need to turn the other side in the competitive world of dating. I had the chance to speak to the actor about playing a serial killer, his work on EastSiders and working with James Franco.

What were some of the most inconvenient parts about being covered in fake blood?

(Laughs) Well, let’s see, I’d say first thing that comes to mind is guilt. I felt really bad because we’d get blood all over Jim’s house, blood that ended never coming out. We also got blood all over our production designer’s apartment. I felt pretty bad about that but it washed off from all my clothes, so I was happy.

What was it made from?

We had different kinds depending on its application. We had a few blood special effects supervisors on set, they were amazing. One of them is thicker and has a sugary base, so you dress it down with watery blood. All of it can generally be eaten.

Usually we go through the day thinking we could “kill” the person who cut in front of us in line, or who was a jerk at work. Did playing an actual killer help channel those feelings?

I don’t know about you, I always feel weird about saying this, but have you ever had a dream where you have to kill somebody? I have! And it’s like they won’t die in the dream, obviously that’s metaphorical. So shooting the murder scenes was distracting because there were many things I had to be conscious of, like the camera. When it came to murdering certain people we were concerned with safety, I felt horrible when I hurt Rachel Shukert’s neck with one of the retractable knives and felt horrible about it, you can’t lose yourself when you’re going to town on something. I think it was a bit in line with my character when it came to being in control. So I wasn’t as wild as I thought.

I thought that the film in a way was a good companion piece to EastSiders which shows how dating can be hell.

Definitely. I guess I’m a victim in both, my character in EastSiders can be pretty tragic when it comes to the dating scene, which I feel sometimes I can relate to, LA isn’t the best dating place and it’s easy to be isolated and not put yourself out there. On the flip side I’m part of the problem in You’re Killing Me, but you could also make the case I’m a victim of the horrible people around me. I really mean well as a boyfriend in the movie, I’m the only really sweet person in it.

How is it as an actor to have the opportunity to develop a character over a few seasons like on EastSiders and living with one for a limited time like in You’re Killing Me?

I prepared for a while for Joe, and we did a few changes as the screenplay went through rewrites, it is nice to play Jeremy and have a family, we’ve been together for 3-4 years, and it’s fun to have that network and to see where our characters go. Kit [Williamson] the creator, is great and I think he was rooting for Jeremy to hit rock bottom at the end of Season 2 (laughs) which was fine with me, it was comfortable to shoot depressed scenes in my underwear.

Did making the movie make you go hmmm about people you’ve dated in the past?

Yes and no, I like to think I’m pretty discerning. I think we all put ourselves in stupid situations, as we grow older we figure out what works well. I think we’re all in the spectrum of being a psychopath, it’s just a matter of how willing we are to disregard the world around you, and not be concerned by what other people think. It’s a little bit healthy not to be worried about how others think of you, but it’s also good to be a human being, you need to be sympathetic. This is interesting, because I’m an actor I can’t be too consumed with what others think, otherwise you’re never going to be cast, you end up being put in a box, you need to show people who you are. On the other side you need to be responsive as a human being. In an ideal world we’re all half serial killer.

Jeffery has talked in the past about how excited he was about spending time with James Franco in his boxers when he was on 30 Rock, you were with James in Interior. Leather Bar., did you guys exchange Franco in his undies anecdotes?

That’s hilarious, we actually never even talked about that. Everyone loves to talk about my time with James on set for that project. We really didn’t know where that was going when we shot it, we were all told it would be a short, it’s barely a feature at 60-something minutes, but it was actually not my first time on set with James Franco, and he seems to be someone who out of all celebrities, I run into him all the time, he’s so active and involved in so many different scenes, for all I know pretty much he’s going to be collecting the garbage in my street. I loved working with Travis Mathews, who co-directed it with James, he’s a great guy and I’d love to work with him again.

Who are your favorite movie serial killers?

The Silence of the Lambs is pretty fantastic, you can’t beat Hannibal Lecter. That movie scarred me so much as a child, I read the book when I was 11, I can’t believe my mom let me...I don’t think she knew what it was about, but I remember walking into the kitchen when my mom and sister were making dinner and I had the book in my hand, having just read the scene where Miggs flings his cum on Clarice’s face as she’s walking by. I asked my mom what “semen” was, and she just turned around and looked at me very blankly.

What movie serial killer would you go out on a date with?

I mean, come on Christian Bale in American Psycho.