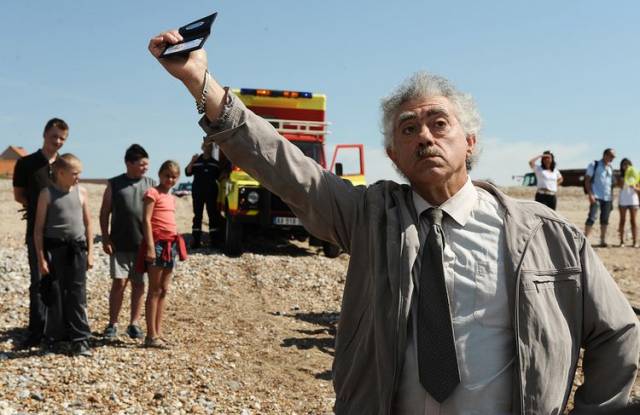 With the face of a miniature James Cagney, Alane Delhaye’s little Quinquin makes us smile from the second we see him. Short blond hair, eyes full of wonder and know-it-all-ness and a cynical grin, that make him feel like an anachronism, he is indeed a combination of Sam Spade end Dennis the Menace as he explores the countryside near his small town collecting mementoes from abandoned bunkers. During one of these adventures, Quinquin and friends run into a gruesome discovery, as they see a police chopper pull a dead cow from inside a cavernous bunker, the image of the floating cow evoking both Fellini and Gilliam. Little do they know at the moment, that what’s inside the cow is even more macabre, as detectives find a woman chopped into little pieces.

What’s most remarkable about Bruno Dumont’s Li’l Quinquin, is that as fascinating as the murder is, the real joys of watching the film are not in discovering who did it, but in the investigation involving detectives Van Der Weyden (Bernard Pruvost) and his assistant Carpentier (Philippe Jore), plus a town full of suspects. Originally aired in France as a miniseries, the piece is presented here as a 3-hour-plus long film, that beautifully marries the cinematic with the literary. Divided into four chapters that highlight the film’s novelistic qualities, Li’l Quinquin provides Dumont with a canvas onto which explore many themes that have fascinated him throughout his career (this film itself is an expanded version of his own Humanité) including gang-like behavior, xenophobia and existentialism.

In fact, the xenophobia seems to be the only thing linking the younger and older generations in this seaside town, which happens to harbor more secrets than anyone could’ve imagined. It makes sense that Dumont shoots only a handful of interiors, most scenes taking places in fields, roads or open spaces, where the threat of something terrible happening decreases. The film is populated with quirky characters that upon closer viewing are more realistic than we first imagined. For example, there’s Aurélie (Lisa Hartmann) a beautiful young woman obsessed with being on television, perhaps little aware that TV-fame happens easily only to those without any real talent. Dumont, for good measure, points out the cannibalism of the television industry, which sensationalizes in order to feign human interest.

To keep the mood less eerie, Dumont gives Li’l Quinquin a deliciously dark sense of humor, perhaps so dark that it’s rare to listen to people laugh at exactly the same moment, there are no key funny scenes, and the film works more as an all-seeing mirror, which will allows viewers to express their levity shamelessly sitting in the dark. Quality philosophical dialogues are exchanged between Van Der Weyden and Carpentier (“is she whole?” asks the world weary Weyden upon hearing news of another murder) who as they work on trying to solve their case, turn us into accomplices in the crime, making us wish the inquiry, and the pleasures we are extracting from it, would go on forever.