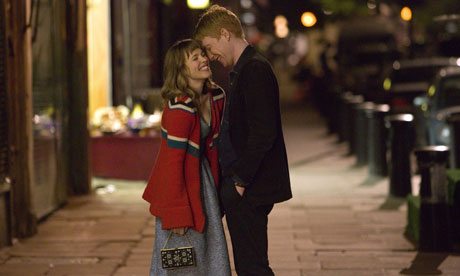 Richard Curtis’ “About Time” has more charm than any movie has a right to have, and because of this, it’s quite easy to forgive it for its many shortcomings. A standard romantic comedy with elements of fantasy and science fiction, the film’s premise is quite simple, on his 21st birthday, Tim (Domhnall Gleeson) learns a family secret from his father (the incomparable Bill Nighy): all the men in his family can travel back in time. His father continues to explain the rules and how this ability has made his own life richer, before Tim has already decided what he will use his newfound powers for, “[for me] it was always going to be about love” he says.

Like a “Sex and the City” heroine, he leaves his idyllic house by the ocean and moves to London where he begins practicing the law while desperately trying to find someone to call his own. One day - in what turns out to be one of the film’s most imaginative scenes - he runs into Mary (Rachel Mcadams) a lovely young woman who he will spend the rest of the movie pursuing. The thing is every time he goes back in time, he keeps missing his window to meet her and make her fall in love with him...but you don’t need to be too versed in cinema to know exactly where the movie will take these characters.

“About Time” has been accused of being a misogynistic film that doesn’t allow women the right to decide for themselves (only men can travel back in time and women are never part of the secret) and this might be looking too hard into a plot that basically has a man try to make one woman happy by becoming the perfect man for her. When Tim travels back in time to try and rescue someone he loves dearly, he risks his entire existence with Mary and even puts in jeopardy the gender of one of his kids (don’t ask), but the film never seems like it’s doing any of its preposterous gender insulting on purpose. It is really as naive as its character and thinks that by constructing men who aim to fulfill women, it’s actually displaying a noble purpose.

The truth is that more than a movie about heterosexual romance, the film is a love song to the relationships between fathers and sons, something cinema hasn’t touched much. Nighy and Gleeson have better chemistry than any of the couples pursuing romantic love and as such, it succeeds on many levels. Curtis might not be the poet of l’amour others think he thinks he is, but his movies have such compassion and sincerity that to hate on them is to deny oneself from truly simple - and simplistic - pleasures.