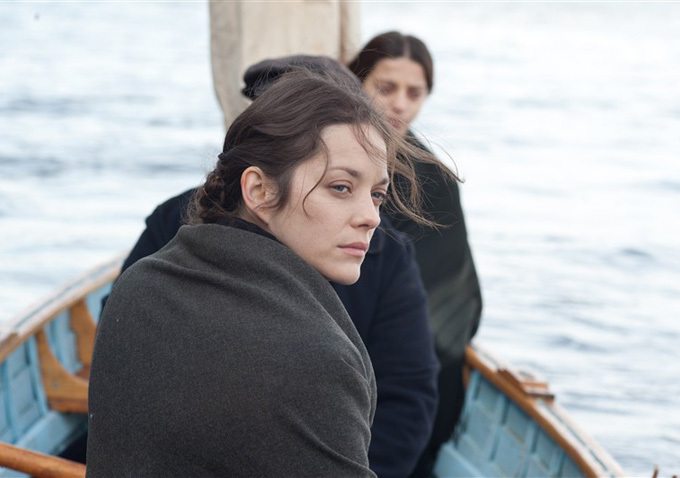 If James Gray’s “The Immigrant” had been made during the 1940’s, Ingrid Bergman would’ve played the heroine: a young woman by the name of Ewa Cybulski (Marion Cotillard) who escapes her native Poland and arrives to 1921 America in search of a better future. However, once she arrives she realizes that the dreams offered by this promised land only materialize to those willing to pay the highest price, as she is separated from her sister Magda (Angela Sarafyan) and is forced to enter a life of prostitution and poverty at the hands of Bruno Weiss (Joaquin Phoenix) a sly impresario who passes himself off as a showman.

With overall simple themes and a sincere desired to be an old fashioned melodrama, “The Immigrant” takes a harsh look at America’s history of being unwelcoming to people seeking refuge from the dangers of their home countries. The film could’ve easily been read as a xenophobic warning for foreigners to stay away, but instead it presents us with the heartbreaking realization that sometimes a land where you’re always reminded you’re a complete stranger might be better than the place where you were born.

From an evocative screenplay by Gray and the late Ric Menello (who directed the groundbreaking Beastie Boys’ video “(You Gotta) Fight For Your Right (To Party)”), the film presents us with complex characters who reveal more than expected and go beyond being “La Strada” redux. For all the wickedness and corruption found in Bruno, there’s an equal amount of deadly desire emanating from Ewa. The two of them establish a co-dependent relationship that leads them to explore extreme opposites of who they usually would be. “I like money, I don’t like you” exclaims Ewa upon seeing the cash she earned by selling her body.

Besides borrowing its structure from the famed Federico Fellini film - Jeremy Renner plays a magician who falls for Ewa and makes her life slightly more pleasurable - “The Immigrant” also covers a short history of mass entertainment in particularly perceptive snippets. We see vaudeville, the aforementioned illusionism and even a performance from Caruso himself as Gray establishes that this new country would become known for creating lush, unattainable facades.

While everyone in the cast is phenomenal, most attention should be given to its leading lady: a lesser actress would’ve made Ewa seem like a martyr, but the endlessly expressive Cotillard gives her a humanity that becomes beautifully ironic when seen through Darius Khondji’s lens. The renowned cinematographer shoots the film in melancholy yellows, grays and browns that make us feel like we’re watching a movie from the era (cinema after all was a novelty in 1921), during a pivotal scene Ewa attends confession - she’s also a Catholic living in a Jewish community - and she seems to be looking past the priest and into the eyes of her god. “Has it become a sin for me to try so hard to survive” she asks, her plead only more heartbreaking because her god remains silent.