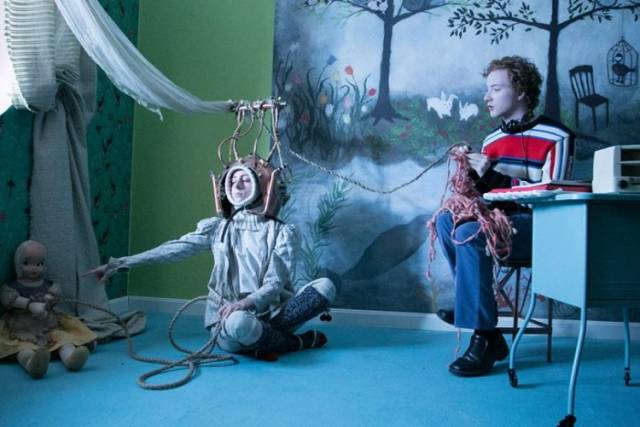 Visually and thematically, Hooroo Jackson's increasingly claustrophobic directorial-debut, Aimy in a Cage, is in many ways a feature-length invocation of Terry Gilliam's glory days. It also indubitably draws on Tim Burton's suburban nightmares, the fantastical filmic collaborations of Jeunet and Caro, the stories of Kafka, and Nabokov at his most Kafkaesque. The influences upon Aimy are, in fact, so unobscured that one might be tempted to call the film derivative but for the sake of two virtues that it bears: one is that, at least in terms of its influences, it handles the styles and themes of those influences better than any of the mentioned influencers have in quite some time, and the other virtue is that it mixes them together and balances them so that they are stirred up and presented as something that feels new and original and that is driven by its own personal, darkly humorous energy, so that it would really not be too fair to talk about Aimy only within the framework of its obvious predecessors.

The premise of the picture concerns the imaginative young romantic, Aimy Micry (Allisyn Ashley Arm), who lives and battles with her tyrannical grandmother (Terry Moore) and her grandmother's scheming beau. A slew of others come and go: Aimy's intellectually pompous boyfriend, Steve (Michael William Hunter); her uncle Gruzzlebird Micry (Theodore Bouloukos); and the Moss family, to name a few, all of whom deem Aimy to be mentally ill and force her to submit to a special treatment, a mixture of lobotomy and Pavlovian behavioral correction, which doesn't quite take in her case. Oh, and there is an epidemic of apocalyptic proportions going about which eventually traps all of the characters under the same roof, restrained by quarantine, fear and escalating paranoia.

There is indeed a lot going on in this movie and it comes at the viewer with a dangerously frenetic pace that is just barely properly orchestrated by skillfully schizoid editing. The characters are all exaggerations to the point of being cartoons, which is appropriate as all outside media that penetrates into the house in which Aimy resides, comes in the forms of early animation and paranoid newscasts. The art of the film occurs as these cartoonish characters become players in a surreal parable about control, fear, the imagination and the sadism of hopelessness. By and by, the absurdity of the people who come in and out of Aimy's sphere of captivity becomes apparent as they each maintain their trivialities and arbitrary sway over their limited domain as the whole world outside crumbles around them and surrounds them with death. That being said, the film is actually quite a lot of fun, even if it does begin to falter and fray as it comes down the home stretch.

And the doe-eyes of Allisyn Ashley Arm are aesthetically attuned to the kookiness of her part which she manages well amidst the confined maelstrom. She is the artist and even as her horrible grandmother destroys almost all of her art, save for one painting of a crocodile, and even as all those around her attempt to bend her to their respective wills, she is the only one who ultimately maintains her freedom and any hope of spiritual survival. Mad though she might be, unhinged though she may be, she is yet saner than anybody else in her world; more rational for the very reason that she does not try to disguise her irrationality, and we see that the dance for which she is earlier damned may in the end be her saving grace.