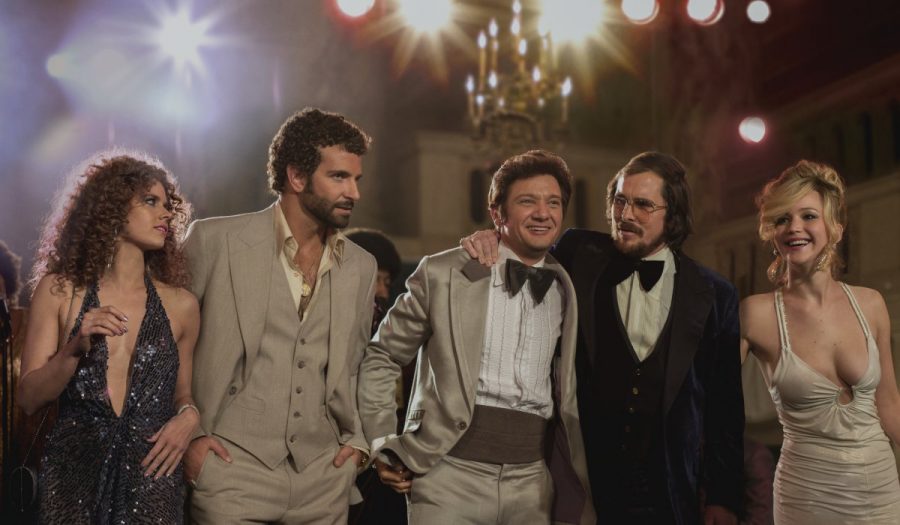 Everyone loves a good con; movies like "The Sting" have masterfully captured the art of the flim-flam, giving us a step-by-step insight into the process while still keeping enough secrets to surprise us at the end. David O. Russell's "American Hustle" attempts to join the ranks of great con movies, but forgets to let us know who is getting conned, and why we should care. As an ensemble of over-the-top characters are paraded across the screen, the audience has no time to connect with anyone, making "American Hustle" an unfocused and unenjoyable experience.

Irving Rosenfeld (Christian Bale) is a scam artist. While he runs a legitimate laundromat, he makes most of his money selling art forgeries. His illegal operation grows into a partnership with the sexy Sydney Prosser (Amy Adams), who uses a fake British accent to lure in suckers. The two enjoy their success and love for a while, but their bad deeds catch up to them when FBI agent Richie DiMaso (Bradley Cooper) closes them down and gives them two options: go to jail, or use their hustling skills to help him catch crooked politicians. His mark is Mayor Carmine Polito, who is currently trying to bring casinos to Atlantic City.

"American Hustle" is not what you expect it to be. It's more madcap than crime drama, wavering uneasily between comedy and earnestness. Every scene shifts perspectives to new characters, leaving us with an awkward rotating protagonist, which is very different from multiple protagonists. We have no time to build allegiance to any one character, and worse yet, we have no time to dedicate ourselves to their problems. Ensemble films work when we are given ample time to absorb the changing conditions of the plot. "American Hustle" sprints through plot points like a marathon runner. Yet if you call it a character-driven film, you find that there are no characters worth putting your support behind. By the time the twist ending hits you'll find yourself surprised, but not for the right reasons.

The one reason this B-grade Scorsese flick works is the dynamite performances from the entire cast. Bradley Cooper is positively a mad hatter as Richie DiMaso, with a personality built by delusions of grandeur. He sees himself as destined for greatness, working tirelessly for a big bust even if it means setting up a nice guy in Mayor Polito. The other shining star is Jennifer Lawrence, who plays Irving's wife Rosalyn. If they had Real Housewives of Long Island in 1978, you would find Rosalyn on that show. Lawrence is funny and sexy, and works really well off of Bale's straight-laced Irving.