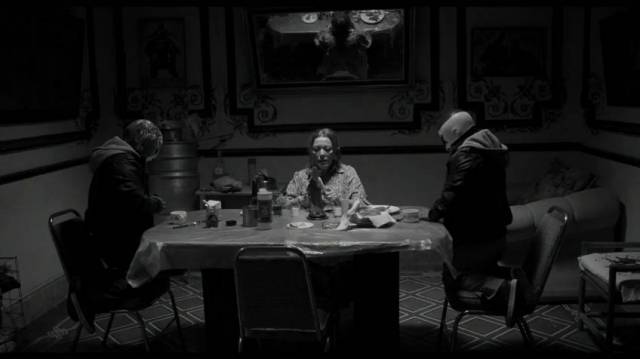 An ultra smooth sailing Steadicam roams the desolate streets of a seedy district in Mexico City judging not, or all, of its peculiar inhabitants in Bleak Street. Arturo Ripstein's crime drama consists of much exposition, before the unintended, quietly explosive fallout. The first two: dwarf luchadores Little Death (Juan Francisco Longoria) and Little AK-47 (Guillermo López) who shadow full size versions of their respective fighters, sharing the get-up, but a fraction of the fame. Both are married with children, but not too happily so. Their manager father is a drunk, leaving their mother in control to collect their pay and dole out allowances and blessings in equal measure. The initial scenes touch on one character to the next, as wives, mother, madam ask for money in various forms of payouts, allowances. That lucre runs and ruins lives is no unfamiliar tale in a crime drama, but the characters here brim not with greed and ill-intent, only smack of prosaic longings; a new cape or gloves fabricated from more expensive material. The struggle is not sensational, merely fact, and the masterful Ripstein presents it not with documentary realism, but a hint of delicious absurdism.

When Bleak Street takes place is a mystery; the film feels timeless, like black and white photographs cemented into myth. With pitch-blackened boarding rooms or wrestling rings imbued with a spotlight (or interrogation lamp) of omnipotence, Bleak Street can recall the look of the theater with Mexico City, its metal staircase railings, crumbling cement, as Ripstein’s stage. It is a stunning cinematography of clarity and obscurement. Light pokes down through the rickety tenements, but its blazing rays do not reach every corner. It throws huge contrasts, like in the best of noirs, of shadows and highlights like the sudden glow of a flashbulb and its ensuing flickering and fizzling out.

Speaking of fizzled out, two prostitutes, maternally gruff, lose their corners to the young. Experience counts for nothing, as one is told. Dora (Nora Velazquez) supports her cheating husband and a loose daughter, and Adela (Patricia Reyes Spindola) props up her not-fully-there mother to beg, to the criticism of her neighbors. These exploits are grim but resist outré representations. Already established by the effortless camera, their fates intertwine with those of luchadores whom they decide to drug and rob in a plan that goes belatedly awry without their knowing. The options are limited, and there isn’t anywhere to turn. Though difficult to believe, the film is based on a true life account of the accidental murders of twin luchadores. Ripstein has a careful, benign hand, free of caricature and sentimentality. His feat is in the storytelling; the stripped down version of the preposterous story reinforces its tragedy.