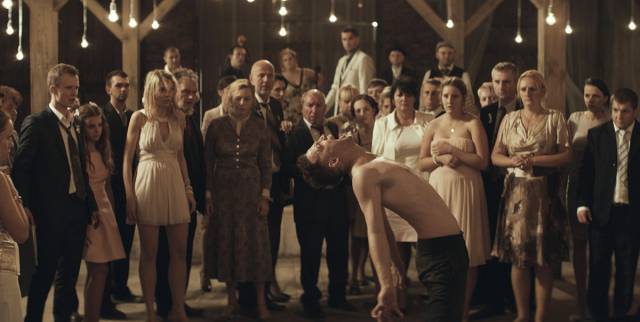 Marcin Wrona’s Demon, is extraordinarily striking for a great number of reasons, but perhaps none more so than for how very eerily spectral even the un-possessed human characters seem. Rarely does a horror film weave such a tapestry as this, such that the viewer emerges from it, not so much as one emerges from situations of fear, but rather as if from a dream or a spell.

The plot is simple like a folk tale; indeed, it is based on the Jewish legend of the dybbuk. Peter (Itay Tiran) arrives from England to marry Zaneta (Agnieszka Zulewska). As a wedding gift, Zaneta’s family gives the young couple the family’s ramshackle country house. On the day before the wedding, while digging around the grounds, making plans for future constructions, Peter discovers a pile of human remains. As the ceremony commences, Peter begins having visions of an unknown woman and acting rather strangely in increasing measure. Turns out he dug up a dybbuk, a kind of demon in Jewish legend that clings to a human soul on account of unfinished business.

The result is a situation that is both darkly humorous and festively unnerving. The crux of the matter is that the dybbuk has crept in to a party wherein almost everybody is very, very drunk, and the drama and the tension spring more from the differing reactions to the inhabited groom than from the conflict between the groom and the dead woman who has taken over his body. The atmosphere is intensely bolstered by compositions, editing, sound, and otherworldly performances, which, all put together, serve to create an air of intoxicated unease, as if being incredibly deep in the bottle while trying very hard to grasp some ephemeral thing that keeps dancing out of the way and into the cellar. Drifting about on thematic undercurrents of anti-semitism, scientific denial, and religious doubt, Wrona’s Demon is a gorgeous and mysterious film, and with the director's passing - this was his final film - the world of cinema has lost a wonderful magician of the art.