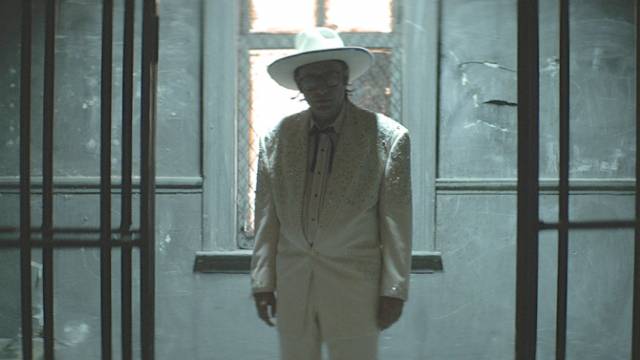 The idea that comedians are the unhappiest people on earth has never proved truer than in Rick Alverson's fourth feature, Entertainment. Behold The Comedian, a middle-aged man who dons a ruffled shirt under an ill-fitting tux and oversize plastic glasses, not the ironic-cool kind. He’s played by Gregg Turkington, in character as his sadsack alter ego Neil Hamburger, though here The Comedian is nameless.

The Comedian cradles three drinks in the crook of his arm and sports a gross comb-over with sticky strands of hair spread out like spiders’ legs across his forehead. He moistens them constantly with a spray bottle because this is not his real hairdo. The true comedian, or the vestiges of a human soul beneath this purposefully repellent get-up, isn't in much better shape. He may have a better sense of hygiene, but is still a lonely, put-upon man. His voice is soft and innocuous, not at all like the grating voice -- part moan, part old-man shakiness -- that decries Courtney Love’s existence and clears his throat on stage. When not performing for measly crowds, he wears khakis, and still alienates the few people he meets not by malevolence, but indifference. But at this point can you blame the battered soul, the sad clown? There's an actual clown, too. Tye Sheridan plays one in suspenders and bowler hat, miming (or mocking) the audience with indecent gestures. Take it as you will that the crowd digs it, or is at least entranced enough not to disturb his routine. Monkeys, all of us.

During the day the comedian roams the beige expanse of the desert, existential and literal, littered with absurdities like broken planes and fake saloon sets that for him register little fascination or fun. At night he suffers insomnia; the droning score, which recalls cars, helicopters, and violins, ominously crescendos just as his head hits the pillow. Instead of sleeping, he leaves daily voicemails for a daughter that never calls back. There is no rest.

But, Entertainment is not as punishing as it may sound. It is in fact highly entertaining, punctuated but not punctured by humor. Run-ins with his cousin (John C. Reilly) and others are truly funny, without undoing the film’s bleak outlook and sense of dread. Entertainment delivers a slow-burn thrill, where danger feels a close step behind. The Comedian pushes buttons; his caustic jokes are met with few, if any, stifled laughs. Sometimes there are hecklers that he is a tad too eager to put in place, revealing a deeper well of bitterness and distress. The threat of violence is never fully executed—nothing beyond a push, shove, and drink slammed in his face—yet a sense of terror pervades like in the best (or worst) of nightmares. It's not an easy feat for a film to be nightmarish, genuinely hilarious, and affecting, but Entertainment is all three. Part Lynchian hallucination, part deadpan comedy, part existential musing, Rick Alverson's unique vision is fully realized, and even ugly, but demands to be watched.