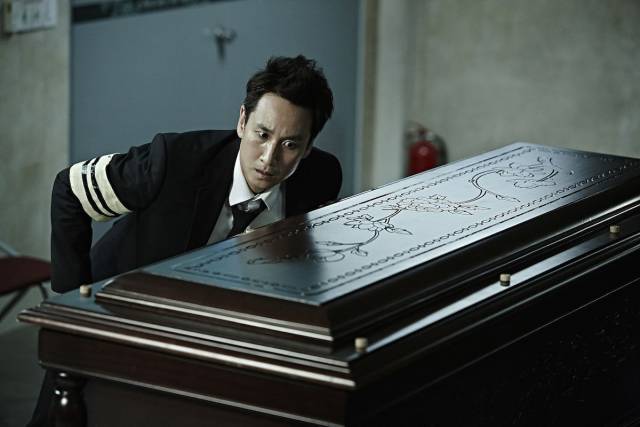 A Hard Day is a madcap good cop vs. bad cop thriller streamlined for pleasure and plot twists. Bathed in unattractive fluorescence the movie has no qualms about looking good, but presses on with riveting velocity. On the drive to his mother's funeral Go Gun-soo (Lee Sun-kyun) smashes into a body and stashes it in his trunk. Things get worse when he refuses to grace the breathalyzer at a DUI checkpoint with his pre-funeral soju exhalations and tows a fine line with a quartet of local cops when he cannot furnish his ID. After all, he doesn’t need one. Gun-soo is… a homicide detective. The story's piecemeal unraveling drops nuggets of revelation like this, inspiring gasps in miniature easily anticipated by viewers who can detect A Hard Day’s principal roots in Hong Kong action movies.

Gun-soo was telling the truth, but don't blame the cops for their reluctance to believe him. His squirrely behavior gives reason for pause and doesn't improve the following day when a cold case folder slams his desk bearing the face of his hit-and-run victim, which he stowed into his mother's coffin. Further demonstrating Murphy’s law, Gun-soo and his colleagues become the subject of an embezzlement investigation. A Hard Day is a heart attack for the neurotic, provoking a specific brand of anxiety built more on the foundations of guilt and less on those of “wrong man”—that is until another twist.

Lee Sun-kyun, major TV and film actor and heartthrob in South Korea, spends approximately 98% of the movie in state of palpable duress with perpetual beads of sweat and a tremello voice.  It’s over-the-top (as are most of this genre movie’s conceits), but a befitting portrayal of someone who has freshly committed manslaughter. A calm, collected killer he is not. That role, of unflustered baddie goes to a threatening witness soon revealed to be a corrupt cop named Park (Jo Jin-woong). A menacing force with half-a-foot and a good few pounds on Gun-soo, he's the kind of black topcoat-clad villain who experiences resurrection in multiple after varied acts of violence, predominantly blunt force trauma. Mainly absent is gunplay.

Director Kim Seong-hun’s unique humor is usually droll and deadpan. He doesn't overemphasize objects like a remote-controlled soldier or other marks of inventiveness better unspoiled. In an instance of visual resourcefulness, an aerial foot-chase through the streets of Seoul streets that resembles Frogger is terrific, tense, and elicits wicked giddiness. First and foremost engrossed with its plot--the characters are ultimately only a channel for our distress and suspense-- the movie pushes until its satisfied conclusion, but is devoid of thematic depth and cultural commentary, save a breezy snark on general law enforcement corruption and filial piety.  Nothing new for the canon. It could have been in any language or from any country, making for a digestible for adaptation, but why bother with a remake when this one’s already as much fun?