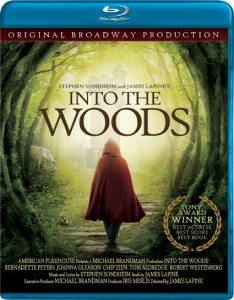 There is probably not a single musical theater lover unfamiliar with the 1987 production of Stephen Sondheim’s Into the Woods. The James Lapine-directed show became the ultimate how-to-make a musical guidebook once it was broadcast on PBS in 1991 (with some people claiming it was the only thing the channel aired during the early 90s) and the 1997 DVD release was studied so much, by so many that it was a blessing when Netflix put it on their streaming service (sadly, it’s not available in the United States anymore). It was a true blessing then, that Image Entertainment decided to give the show a Blu-ray update (released on December 2, 2014) which has become the best available recording of the Tony-winning production.

Sondheim lovers, who know the show by heart, don’t need to be reminded of the plot, but this Blu-ray is a perfect way to introduce neophytes to the wonderfully quirky world where characters from myriad fairy tales co-exist in imperfect harmony. We meet a Cinderella (Kim Crosby) desperate to attend the King’s festival where she hopes to meet the Prince (Robert Westenberg), a gluttonous Little Red Riding Hood (Danielle Ferland) who meets her match in a muscular wolf (also played by Westenberg) with a desire to satiate all his levels of hunger, a kind but naive boy named Jack (Ben Wright) who is sent into the woods to sell his beloved cow, a long-haired maiden named Rapunzel (Pamela Winslow) trapped inside a tall tower by her adoptive mother, the Witch (Bernadette Peters) who also holds the key to the happiness of a Baker (Chip Zien) and his wife (Joanna Gleason) who dream of nothing else but to have a child, but first must break the spell cast by the Witch years before.

A show that’s as thematically dense as it’s musically rich, Into the Woods enchants viewers of all ages, based on their current place in life. Children will find Red Riding’s Hood plea to be full of comedy and thrills, while teenagers will feel identified with the mixed-up emotions she describes as being “well, excited and scared”. Each and every character in the show has a clear purpose and Sondheim uses them to express his nihilistic worldview as we see sons being “punished” by the misconduct of their parents, daughters rewarded for their selfishness and wives who meet their demise seconds after having moral epiphanies. Into the Woods is one of the darkest pieces of musical theater ever written, and at times is more so even than Sweeney Todd, which is actually about a serial killer and cannibalism. Sondheim codifies the meaning of many centuries of knowledge passed along through fairy tales to reveal that perhaps perfect parenthood is the biggest fairy tale of them all.

The show has been transferred to 1080p and while it’s an obvious improvement from the DVD version, it still can’t provide sharpness and clarity that wasn’t there to begin with. As it is though, the richness of the blacks makes for a superb viewing experience since it highlights the show’s inventive lighting design, in which things are revealed only once we’re ready to find them out. Sadly, there are no bonus features on the Blu-ray, but who can ask for more when we finally have this superb production in high definition?

From Page to STAGE: The Evolution of SUBMISSIONS O...
5 Reasons We Can’t Wait for NBC’s New ...
Obscure ‘La La Land’ References from &...
Interview: Nolan Gerard Funk on His Character in &...