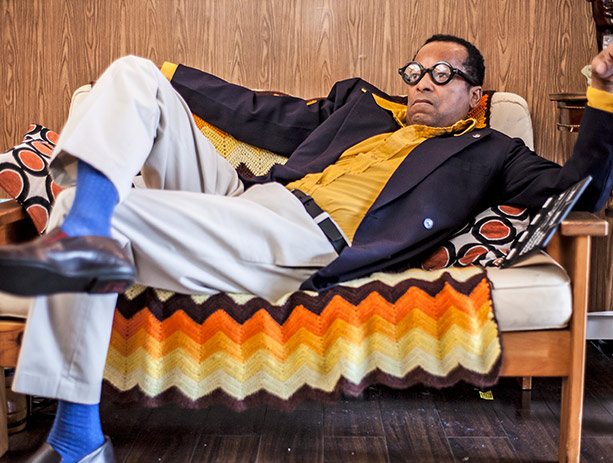 Exploring race, class, and sexuality, the seminal documentary Portrait of Jason (1966) still remains the only piece of essential cinema to prominently feature a gay black man. Starring Jason Holliday, a one of a kind, downtown hustler, the film became widely known for capturing Holliday’s unraveling at the behest of the off-screen voices, including that of director Shirley Clarke.  Stephen Winter's inventive film Jason and Shirley is a fictional companion-piece that re-imagines what may have transpired during the notorious half-day shoot at the Chelsea Hotel. Grainy and inconsistent, the movie has the feel of an old VHS tape, complete with tracking lines and distortion, that simultaneously dates the film as artifact from a bygone era and home movie, the slapdash quality and playful energy proving a match for Jason’s snappy personality.

Theater veteran Jack Waters plays Jason, boisterous and sly, and late on arrival. Preferring to speak in riddles and quotes, he wards off the level-headed Shirley (Sarah Schulman) who mostly keeps her cool while he drinks, sings, tells jokes, and crudely hits on a pretty boy crew member, all under Shirley's supervision-- professional patience and partial enablement.  They go toe to toe for the course of the film as each attempts to control the direction of the interview, that is, the image of Jason, who more than once makes aware that he's being used Shirley, herself a fascinating figure. Born and raised on Park Avenue, Clarke was Jewish female filmmaker, outsider identifier, and above all searcher for truth.  Winter strays from cinema-verite style so favored by Clarke, with frequent flashbacks as Jason relays colorful tidbits from his past.

Jason is not easy to rein in, fading in and out from not only the booze and drugs, but also the reluctance to tell all. Like a child, he taunts Clarke who steadily queries him to tell this, tell that. Tell us when, Jason. Wouldn't she like to know.  The one repeat request re: Jason's relationship with his father is at last answered with the help of Carl Lee (Orran Farmer), devilishly handsome actor, drug dealer, and Shirley's lover. Their relationship lightly touched upon here. In the original Portrait, Lee was the offscreen voice chiding Jason into a tearful breakdown, that seconds later turned out a wide smile, raising a question of authenticity.  In this fiction, Winter make us privy to Jason’s struggle and his fight against being encapsulated or captured, in one way or another. The film is more whimsical than hard hitting, and in some ways the jocular tone betrays the seriousness of its subject, but it is in the end still a fascinating piece of cinema.