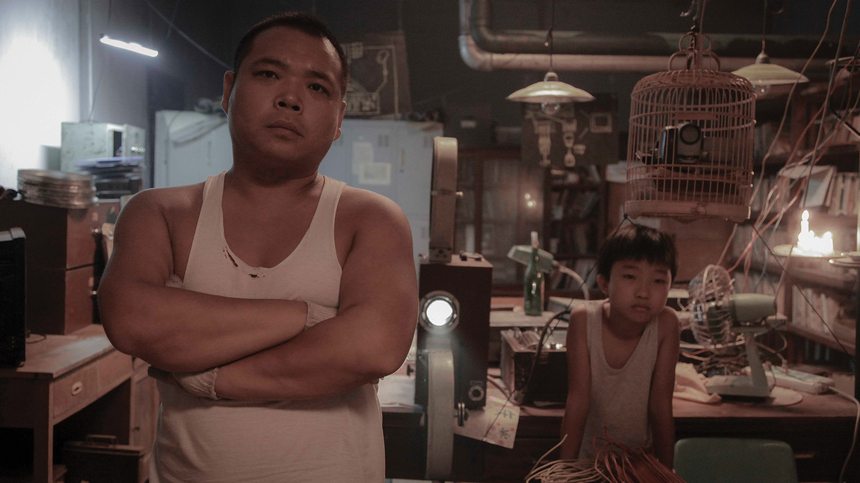 In their crowdfunding video, Sam Voutas and friends describe how their last venture, Redlight Revolution, was hijacked. Twirling an umbrella with stolen Redlight artwork plastered on its plastic body, the team winds through the backstreets of a Chinese town telling their tale. Pirated, branded, marketed, and distributed without the actual creator's involvement, the filmmakers took this violation of creativity as inspiration for their next venture: King of Peking.

Set in the countryside of late 1990s China, the film tells the story of a father (Jun Zhao) who goes to great lengths to scrape together the cash for alimony payments, the only way his ex will allow him to maintain custody of their son. Taking advantage of the absurd comedy that tragedy can produce, the father turns to bootlegging the films of the theatre he plunges toilets in. With the help of his kid, the projectionist, turned janitor, turned counterfeiter, give cheap flicks to their community, which they devour intently.

The film sets the stage with the opening of a burgundy velvet curtain, uses the omniscient narrator voice, and includes chapters, splitting each section into delectable bites. The soundtrack, extracted from classic Hollywood flicks, gives magnificence to the humble landscape, and the color palette has a lush quality that matches the magic of cinematic projected light. The humor is relatable, and has an ease and style the likes of which can be seen in Bottle Rocket, while the relationship between father and son recalls the marvelous con artists of Paper Moon.

An homage not only to film, and film aficionados, King of Peking is also a tribute to those silly little moments in life that make it worth remembering. It speaks to the act of creation, cause and effect, choice and consequence. This is a wonderful tale showing what perseverance, love, and a lil’ ghetto rigging can do.

For more information on King of Peking click here.

Tribeca Review: November
A Review of ‘Filmworker’
Review of ‘Gringo’ starring Charlize Theron &...
The Shots That Won These Classic Films Their Best ...