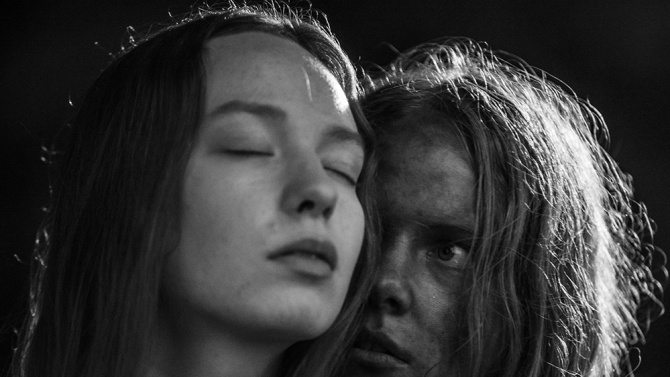 Look how the light illuminates the dust, free from shadow, the sweat beads pearled on skin, the frigid bright snow, and the silken hair of the protagonist Liina. This is the magic of black and white cinema. November immediately entrances with its aesthetics, but one will also become enthralled and repelled by the brutal nature of the plot.

Clearly a lover of literature, as proven in his previous film <em>The Idiot</em>, director Rainer Sarnet’s <em>November</em> comes to us by way of a novel, the cult Estonian classic <em>Rehepapp</em>. The story is centered around Liina (Lea Rest) who is in love with a young man who is himself completely absorbed in his infatuation for another woman. This love triangle is the backdrop for many conceptual turns, most of which are deeply steeped within Estonian folklore, things like Kratts for instance, demons who steal at the behest of their owners who have sold their souls to the devil in order to command and own these creatures.

There is a saying that what we create can also, in turn, destroy us, and this film is an encapsulation of that. The characters’ absolute despair sends them into a cyclical retreat towards gluttony. They are living in the filth of squalor but keep the riches the Kratts have stolen for them hidden under the floorboards. The subtext of how fear and greed can warp the minds and actions of humans is explicit. Perhaps it is an engrossing mirror to society, for what are legend and folklore if not parables of life?

<em>November</em> requires patience and a healthy detachment from plot which makes it feel very disjointed at times. It overflows with metaphor and myth, like a tome of fairy tales; with each turn of the page it is more and more difficult to ascertain its deeper meaning. Everything in the film stems from the primordial void, for it touches on almost all aspects of humanity, including empathy, betrayal, death, hopelessness, murder, nationalism, bigotry, love, and lust, all of which are spread a bit too thinly.

In any case it recalls the enchanting stories that enraptured us as children; like a goddess with porcelain skin and a kiss of death, a snowman who speaks in poetic prose, a girl who turns herself into a wolf at night to watch over her lover. Perhaps, what is grasped at last, it that transience is the final point. Nothing lasts or matters, but it is beautiful all the same.

Review: King of Peking
In Honor of Would-Be Tony Awards, American Theatre...
Making the Film “Trumpacolypse” During...
A Review of ‘Filmworker’