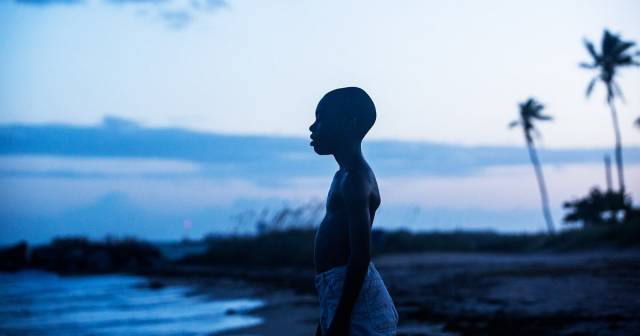 We're all familiar with the narrative elements of Moonlight —absent fathers, drug-users, the escalating path to incarceration, a life cut down and curbed before its potential reached, and desires discovered or relieved. Such is definitely the case for Chiron, a young black man growing up in Miami. But in Moonlight, told in triptych, filmmaker Barry Jenkins updates this tale and tells it without heavy hand or scolding judgement. Segmented movies run the risk of the sum not equaling its parts, but each is unmatched here, significant and necessary. With a minimum of dialogue and a swirling camera, often out of focus, it's simple and most compelling force.

The film begins with a benevolent drug dealer Juan (Mahershal Ali) checking on the corner boys before happening upon a young Chiron (Alex Hibbert) in boarded up house where he’s run after being chased by his classmates, miniature menaces with rocks. This won’t be the last time he’s chased away from his home and comfort. His fugitive status is one of his mind, too. Where can he turn as a young gay black man in War on Drugs era urban Florida? One place he finds refuge of a sort is with Juan and his companion Theresa (a considered performance from Janelle Monae). It’s not exactly bliss, but a comfort that comes danger-free, no strings attached, and much preferable than staying in with his mother (Naomi Harris) succumbing to drugs. The solace is short lived, as is Chiron’s sole romantic/physical encounter with another a boy, Kevin a bug-eyed talkative kid, the kind who’s beloved by everyone, the opposite of Chiron who's an outcast from the start.  How do you convey such rage, turmoil, fear, everything that makes you who you are and not always because that’s who you wanted to be? Each iteration of Chiron is well cast, each actor’s performance sublime and exhibiting the withdrawn thoughtful boy then man with his lowered head, as if his chin were permanently glued to his neck in shame and in silence, which provides the only safety. The camera closes in tightly in front or behind him; it’s the one thing he can’t run from, the camera and us.

Jenkins boils a life down to its decisive moments; a life in three parts is an eloquent and acute summation with Nicholas Britell’s heart-rending music underlining. The third segment is the piece de resistance or the fluke, depending on your point of view, as it takes on a more cinematic turn with jukebox diners and that of a meet-cute reunion, if only we weren’t privy to the past, the persistence of which haunts Chiron like a memory he can’t shake. Throughout, Moonlight encompasses an un-anxious silence with no explosions so to speak, even when violence or pleasure are experienced or witnessed. Like the understanding adults who patiently coax Chiron to speak more than a few words, Jenkins goads us to do the same with through his cinema, filled with pauses and silences, to wait for Chiron as he finds himself.