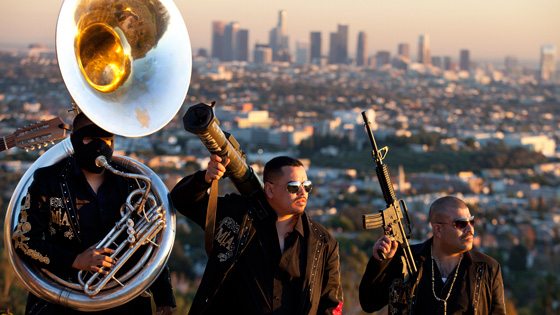 With a two-decade long career in photojournalism, Shaul Schwarz is certainly no stranger to the violence and cruelty that permeate our world. In 2008 he began chronicling the outbursts of crime in Ciudad Juarez, Mexico, which had become the main battlefield of the drug war being waged by the Mexican government and the DEA against the prominent drug cartels. This bordertown eventually became known as the murder capital of the world (in 2010 there were 9.9 murders per day) and within this unending cycle of death Schwarz discovered a story of Dickensian irony by turning his eye towards the city lying across the river: El Paso, Texas.

In “Narco Cultura”, Schwarz delivers a revelatory study of contrasts, as he focuses his attention on two characters, each on a different side of the border. In Juarez we follow CSI investigator Ricardo “Richi” Soto, as he risks his life trying to solve countless murders. Soto is constantly urged by his family to quit his job, marry his girlfriend and move to El Paso (one of the safest cities in the United States) but his sense of duty and “this is all I’ve known” determination make him an unlikely, sometimes even delusional, hero. Surprisingly, or perhaps not so, across the border in Los Angeles we are introduced to Edgar Quintero, singer/songwriter for Buknas de Culiacán, a band that performs narcorridos, a form of music that glorifies the very people Soto is trying hard to incarcerate.

Schwarz shows us two worlds that are split at the center by their drastically different views on the same subject. Stateside, people of Mexican descendancy find these narcorridos to be inspirational stories of the “get rich or die trying” philosophy (one performer even predicts narcocorridos will become “as big as hip hop”) but they remain vastly ignorant about the fact that the beheadings, mass murders and violence they sing about are actually part of daily life in Mexico. Shot in verite style, Schwarz takes us right into the heart of the scene and shows us images that might haunt us forever. Images the kind of which not even the most violent motion pictures can conjure. Children sitting just steps away from a severed body, having a conversation as if it was the most normal thing in the world, looks of fear and exhaustion in detectives who will lose their lives at some point during the film...

To make matters more despairing we learn that more than 90% of the murders in Juarez remain unsolved, which makes us wonder what is the purpose of the police force in a place where they have lost all authority and control. During a key moment, the interviewer asks a border patrolman about the number of people trying to cross the border illegally on a daily basis and how this has been affected by the drug war. The man stares blankly into the camera, perhaps unaware that he’s become merely a symbol of a system that might not be working anymore.