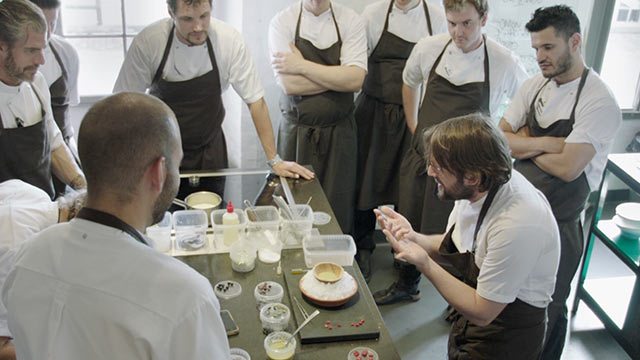 Foodies will rejoice at a chance to see the inner workings of multiple World's Best Restaurant winner Noma, in Noma My Perfect Storm, but may come away a tad unsatisfied, finding something to be desired in the crawling 100 minutes of this documentary whose scope is narrow, but not exhaustive. Its look is sleek and minimal, elegantly shifting between the restaurant itself and naturescapes of Denmark with a couple of news and Go-Pro style footage sprinkled in between. Instances of slow-motion snowfall beg the question of intention and circumstance; whether director Pierre Deschamps had enough footage (one would hope, given the fact that the Deschamps spent three years filming), or if he thought it would be a nice pillow shot distraction from René Redzepi, the chef, owner, culinary genius behind Noma. Shots like these are cheesy and offer neither information nor aesthetic pleasure. Better to focus Redzepi who is fiery and impassioned. He isn't a hothead, though he does judiciously criticize a failed dish and is particularly heated on the topic of racism in Denmark, experienced firsthand; Redzepi's mother is Danish, his father a Macedonian immigrant. The film lays the slender framework of a success story--a young man criticized of not being fully Danish overcomes to represent the revitalized Danish cuisine-- but doesn't delve much into it. It's a loss that the director chooses to focus on the restaurant's problems at the time of filming, a comeback from losing the award for Best Restaurant in the World in 2013, rather than the restaurant's history or Redzepi's path to chefdom.

Noma singled-handedly ushered Nordic cuisine to the forefront of the culinary world, proving it desirable and haute, beyond "blubber restaurant" or" whale penis"-- labels created by the naysayers. Redezepi championed seasonal and local ingredients to the extreme in order to distill the essence of Denmark and the greater region into his dishes. The foragers, most essential in this regard, are given the short shrift. The director favors footage of forests and trees, and less of mushrooms, roots. A deeper look into the topic would have been appreciated.

There's a scene in the film that showcases Noma's ensemble cast, the supporting players of Noma the restaurant. Their smiling faces are in close up like the opening credits of television show, except without names or subtitling. Face time is perhaps enough, but you can’t help but wonder who these young chefs, the Redzepi's of tomorrow are. Similarly, many of the dishes have no captions, as if they need no introduction or as if we're expected to know. For a movie about the world's greatest restaurant, not much time is spent on the food either, green and potentially unappetizing—meticulously placed ants lazily escaping a clot of creamy white— to the uninitiated. It can look like a petri-dish display or the plated work of a botanist, but there is an undeniable beauty and sense of utmost care; it is always spectacularly sublime. However, Deschamp’s restraint and preponderance for stripping away words and explanation renders My Perfect Storm an elusive documentary with snobbish airs.