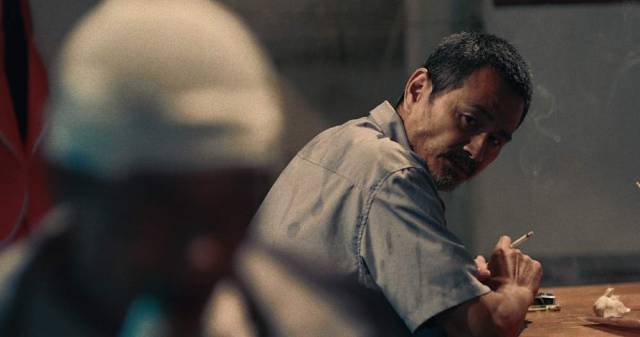 Should you take pleasure in the misfortunes of others, then Old Stone will prove a merriment. For the not so sadistic it might present grumbled frustrations and dour indignities. The site of the injustice in Canadian Johnny Ma’s debut feature is China, where strict legal procedures, insurance policies, and general bureaucracy prevent, if not completely suck out, the possibility for compassion. In fact, our protagonist is condemned for the sin empathy and the barely Good Samaritan-qualifying decision to dutifully drive an accident victim, near death, to the hospital. To be fair, Lao Shi (Chen Gang), a taxi driver, is responsible for hitting the man, albeit after a drunk passenger commandeered the wheel.  The inevitable result leaves him shouldering the victim’s bills, which he pays to the gratitude of no one as he he’s further greeted by unfavorable developments that might rival those suffered by a character from the brothers Coen.

Old Stone, however is not a dark comedy but a social-drama that works because of Chen Gang’s unassuming presence as Lao Shi. The film, astutely un-glamorous, has a neo-realist bent that strips him not only of the charisma afforded a Hollywood actor playing self-righteous do-gooder but also saves him from becoming a pitiable hyperbole of impoverishment. Lao Shi isn’t a have, but neither is he the worst class of have-not; he is able to shoulder much of the burden of the hospital bills and his wife (Nai An) is in the midst of expanding her nursery-childcare center. Surely, there are others who would fair worse. She manages to procure him a legal expert in the film’s finest scene that takes place in private and exposes relations of respect and the vulnerability of being at the mercy of others. It is especially resonant given the survival attitude—one best described as “God helps those who help themselves”—that pervades. Lao Shi’s friends criticize his saintly arrogance and cruelly look forward to a rude awakening from his piousness.

The narrative, written also by Ma, threatens to go off the rails at any moment. A run in with the drunk passenger who set the unhappy chain in motion gives Lao Shi his own wounds. The dramatic possibilities are endless, but Ma mostly plays it straight, keeping to the straight and narrow like his protagonist who could pursue a life of thievery, revive his woe-begotten life, as well as the film’s plot, by gambling or borrowing from the local gangsters that skirt the edges of one scene. There is however a fury being stoked inside of Lao Shi like the rushing wind in the sea of trees that interlace the film. Old Stone fakes a turn into the noir before the ultimate scene, though expected and ironic, wholly appropriate.