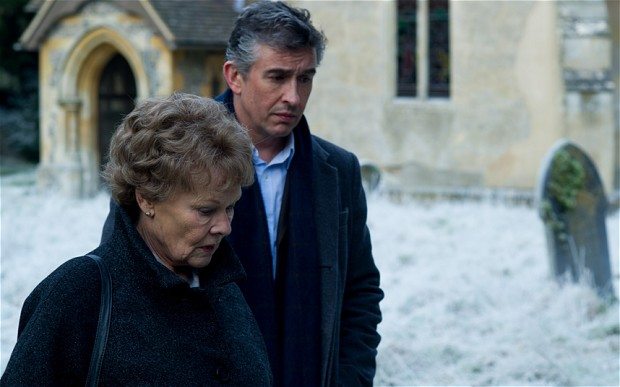 In “Philomena”, Academy Award winner Judi Dench shows us a side of her she has rarely shown on screen. Famous for her stern, authoritative characters and their stinging line deliveries, here she plays a simple Irish woman named Philomena Lee, who confesses to her daughter that fifty years earlier she had been forced to give up her son for adoption. The daughter runs into unemployed journalist Martin Sixsmith (Steve Coogan) who is torn between whether to write a Russian history book or enter the lowbrow field of “human interest” stories. Finally convinced about the monetary potential of such a story, he teams up with Philomena in a search for her long lost son.

Traveling to Ireland and then across the Atlantic to Washington, D.C., Philomena and Martin establish an “odd couple” dynamic which the movies have made us all too familiar with by now. He’s the cynical, sophisticated city journalist, she’s the optimistic, simple minded country mou, err woman, who thinks everyone is “one in a million”. Joke after joke the movie reminds us that people with little education are only put on Earth to help “Oxbridge” graduates remember they have a heart and soon enough Philomena is reduced to a comedic sidekick (because listening to senior citizens saying “clitoris” is always funny).

Written by Coogan and Jeff Pope (based on a book by Sixsmith), the film reduces its characters to stereotypes with arcs we’ve seen myriad times before. From evil Catholic nuns, to gay men in dungarees and reactionary Republicans, the only surprising thing in “Philomena” is that despite of this, it somehow turns into a truly devastating film. This is of course owed to its leading actress, who still delivers the cringeworthy lines with gusto and perfect timing but sees beyond this and finds Philomena’s humanity. Instead of aiming for the brain and liver as she usually does, this time around Dame Dench goes straight for the heart, creating a portrait of motherly love the kinds of which we rarely see in movies nowadays.