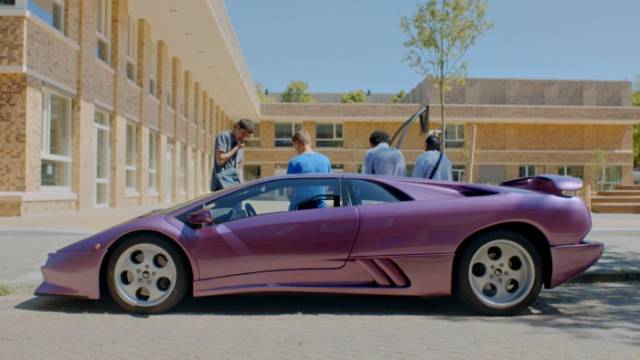 Judging from the stylish camerawork and assured direction featured in Prince, it’s hard to believe this is only Sam de Jong’s first feature length. The young filmmaker, who also wrote the screenplay, has directed several short films and music videos, and while his colorful palette seems to be in tune with what plays on MTV, the emotional content of the film has more in common with the French New Wave. Set in the Amsterdam projects, the film centers on Ayoub (Ayoub Elasri), a 17-year-old Dutch-Moroccan boy who dreams of being one of the “cool kids”, in this case, they’re a band of thugs led by the insufferable Ronnie (Peter Douma) who tortures everyone he deems inferior.

Ayoub has also set his eyes, and heart, on Ronnie’s girlfriend Laura (Sigrid ten Napel) and figures the only way to get her attention is if he out-thugs the thugs she hangs out with; therefore, he reaches out to local kingpin Kalpa (Freddy Tratlehner) who accepts his services. De Jong isn’t reinventing the wheel, and Prince follows conventions of the coming-of-age subgenre (including Shakespearean undertones), but what sets this film apart is how fresh some of its other insights are, when compared to run of the mill flicks which romanticize adolescence more than anyone ever should. For instance, it stresses the importance teenagers set on social status and how materialism is usually associated with success.

De Jong shoots the Rolex watches and luxurious sports cars that the boys dream of owning, with heightened colors resembling the ones in commercials, which makes them look shiny to the point of vulgarity. But the director doesn’t allow audience members to judge the characters based on their desires, instead he invites us to develop empathy for them and understand Ayoub’s plea. While some sequences are stylized in order to evoke teenage worldviews, de Jong makes sure the ideas at the center of the film stay grounded, and at times one feels as if he’s trying to remake The 400 Blows by way of Drive.

The cast, comprised largely of non-professional actors, turns in efficient, if somewhat uneven work, while the score by Palmbomen demands a vinyl issue one can spin at home. Overall Prince is a bold success that announces the arrival of an interesting new voice.