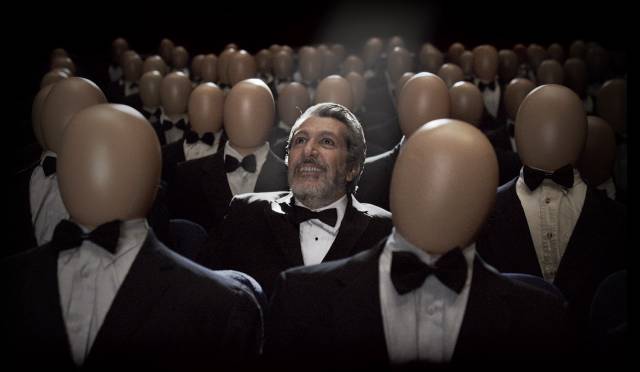 The key to enjoying a film by Quentin Dupieux (with the exclusion, perhaps, of major disappointment Wrong Cops) is to release yourself from logic and settle into a mode of lighthearted, unquestioning viewership. Accepting these parameters allows a potentially frustrating film like Reality to become a delightfully disturbing experience, if you’re down to play.

There are five interconnected story threads to follow in Dupieux’s Lynchian, Los Angeles-based labyrinth. French comedian Alain Chabat plays Jason, the third camera operator on a four-camera cooking show hosted by Jon Heder (of Napoleon Dynamite fame) in a rat costume (seriously). Heder’s character cannot stop scratching the imaginary eczema that covers his body. While the show goes on hiatus for Heder’s rashes, Jason nervously approaches his hyperactive producer friend to pitch a horrendous film concept in which TV sets take over the planet and burst humans’ brains with their waves. Producer/potential psychopath Bob Marshall loves the idea and agrees to greenlight it under the condition that he can find the perfect, Oscar-winning, death groan in 48 hours. Jason sets out on his task. Marshall is also producing a film by American director Zog (John Glover), who is a genius but “lets the film run too long.” Perhaps a nod to Dupieux himself. Zog’s film focuses on a little girl named Reality (Kyla Kenedy), who bridges all five story threads. Reality is seven and tries valiantly to explain to her parents that she witnessed a blue VHS tape come out of the stomach a boar. Eric Wareheim also plays Reality’s school principal, a cross-dresser who sees Jason’s wife (Élodie Bouchez) for psychotherapy. Got all that? Great.

Now try to follow the second half where it all falls apart. In a questionably achieved attempt at dream logic and just-slightly-off Hollywood satire, the latter half of the film weaves the story threads into each other as they slip further and further away from reality. Indie cult director, Dupieux, first famous for the killer-tire movie Rubber, seems to have a bottomless well of self-confidence. He wrote, directed, shot and edited Reality, an amount of titles normally only held by film students and Werner Herzog. Having that much control over a film can lead either to total artistic freedom, total loss of distance from bad ideas, or both. In this case, probably both.

The payoff here is in the delightfully frank performances given by all involved -- most enjoyably Jonathan Lambert’s Bob Marshall, whose frenetic and sometimes arbitrary producer priorities (filming over-budget on Zog’s film and the perfect groan for Jason’s), are a sly jab at the business of Hollywood filmmaking. But gems of connectivity and meaning are few and far between, ultimately leaving the viewer with not enough breadcrumbs to find the plot again. Again, none of this matters if you play the game. Reality is self-aware in both its flaws and triumphs, directing the audience and leaving the viewer to decide whether or not to play along. At one point Reality, the character, looks straight into the camera stating “I’m so sick of this movie”; so are we. Later, Zog responds to Marshall’s cries of boredom saying “he has to be patient”; so do we. Repeatedly, Jon Heder’s doctor tells him, “it is indeed an eczema attack, but on the inside, on the inside of your head,” and so it seems. Reality is a film that demands an adaptation to its rules, and if you can manage that, it's a promise of a quirky, dry, and all around strange time.