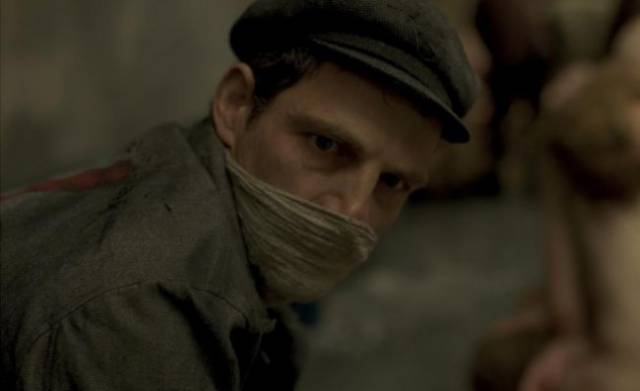 Is it possible to make a holocaust movie unlike any that came before? Laszlo Nemes achieves this with his first feature Son of Saul. The story is among the simplest: After spotting a dead body of a boy whom he takes to be his son, Hungarian prisoner Saul Auslander (Geza Rohrig) decides to give the boy a proper burial, which includes finding a rabbi to recite prayer. A gargantuan task given the circumstance, Auschwitz in 1944, but the no-holds-barred, fully dedicated Saul somehow manages. It helps that he is part of the Sonderkommando, who receives preferential treatment and freedom of mobility, though still limited. They aided in the death camps with the murder of the Jewish prisoners by convincing and comforting them before bringing them to the gas chambers, and cleaning the mess afterward.

Saul's outsize goal must be treated in an equally brazen manner, and Nemes finds one by focusing his camera just above Saul’s shoulder, following him closely in shallow focus as he dodges and weaves through the camp. Rohrig, present in every frame, gives a strong performance. His face is one of masterly contortions and stoicism. Time may be needed for some to acclimate to this wildly jarring set-up, where Saul is constantly on the move and moments of stillness to catch your breath are in appropriately short supply. It would not be far off to describe the aesthetic as first person shooter as in a videogame where the terrain and geography are unknown and without a proper map, information must be gathered bit by bit, relayed through word of mouth from others or participating in a trade. Further deviations from Saul’s planned path occur as it comes to light that a Sonderkommando rebellion is underway, though he bears little interest in the cause. His hope remains in burying the child, which others point out may not even be his, but this is besides the point.

The film is a visual and aural assault on the senses, a visceral experience of the specific hell of the concentration camp. There is an impressive sound design where the constant clanging and whir of machinery, heart-wrenching screams bleed into each other and under the shouted 'schneller’ (German for 'faster'), the Sonderkommando whisper-scream to each other in a hodgepodge of languages, many of which go purposefully untranslated, further adding to the confusion.

Filmed in classic aspect ratio, Son of Saul’s scope of vision is limited and strained even further by the blurring all of Saul's immediate surroundings, including the violence occurring directly in front of his eyes. Nemes’ bold decision to leave much of this violence and the typical Holocaust imagery of death off the screen may ingeniously delineate Saul’s point of view, the repression of his feeling, but this shielding from the horrors is sure to feel like an obscuring of truth to some viewers. It could be said that what seems to be Nemes’ reluctance to recreate such images and erase them proves to be the highest manipulation. In any case, Son of Saul is a film of considerable virtuosity, a harrowing film like no other before it.