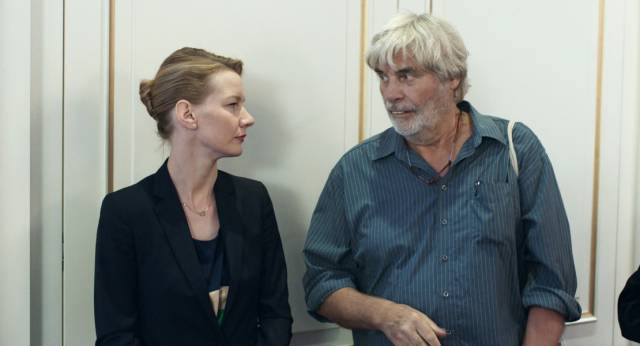 "No matter what they take from me, they can’t take away my dignity." Or can they? Ines (Sandra Huller) dares guests at a party when she belts a Whitney Houston classic in a ballsy, frightfully honest and hilarious scene late in Maren Ade’s Toni Erdmann. A screenwriter’s dream, the film has things to say about life and happiness, and even outright uses these “buzzwords” as Ines refers to them, while managing not in the slightest to sound like a preachy prime time drama. Movies like this- emotional dramedies, character studies, whatever micro-categorization of your choosing, aren’t always this long, 168 minutes to be precise, but why shouldn’t they be? Narratives about familial bonds, here a father-daughter relationship can be its own pyrotechnic display, and as the sublime Toni Erdmann proves, every bit enthralling--and yes even at times diverting--as any heavily plotted genre fare. Indeed, Ade's film is one of those gems that spark laughter and tears in equal measure but the real feat is that neither are unearned results of emotional manipulation.

Two characters, simple in description: Winfried Conradi (Peter Simonischek), a retired school teacher with a penchant for pranks, especially those involving false teeth, disguises, and whoopee cushions, and his daughter Ines, the picture of a joyless lean-in disciplette working as an oil company consultant on assignment in Bucharest.  With a severe haircut, a woman whose affection is hard won if she can muster any to begin with, Ines in the simplest terms is her father’s foil, and so calamity and friction ensue when he concerts an effort to reconnect. She, however (and perhaps not incorrectly), privately discredits his unannounced visit and re-connection-effort as an exploration of issues long dormant and part of a toe-dip into midlife crisis set off by the death of his dog.  He’s second fiddled to her work-related functions (including a trip to the shopping mall, which she deems Romania's most touristic pleasure), where she by turns: uses him and ignores him, frequently denying his existence. Parental embarrassment in the extreme. Despite Ines's all-too serious temperament, Huller draws in our sympathies and curiosities. An award could be given for her lip movements, a taut line here, the slightest quiver there.  She is by turns clinically indifferent, self-serving, and later downright savage once she decides to engage in Winfred's game after a few false exits confirm that he may never leave. Simonischek marvels in this role as well, careful not to push his character into the pitiful.

The actors test each other in this splendid chamber piece with a seamless narrative in which Ade lets the characters run wild. Fascinatingly, for a film so built around its characters, Toni Erdmann seeks nothing from their past. Ade shows little interest in who Winfried or Ines were before the film’s first scene with their prior relationship only hinted at in small details that remark upon the context at the film’s beginning: Sandra’s keeping in touch with her mother and not her father; Winfried’s past as a lazy goof. Nothing is divulged about how Ines became to be who she is, what it was that turned her into the unhappy workaholic she is now, or if she was always that way. Character motivations or the 'precious wound' buried in backstory and procedurally inserted in many scripts isn’t nonexistent per se, so much as unexcavated, rare for what you'd expect is mild family drama. But that’s where the subversion lies. Toni Erdmann is much more than as it propels us instead into the future, rendering the past unimportant.