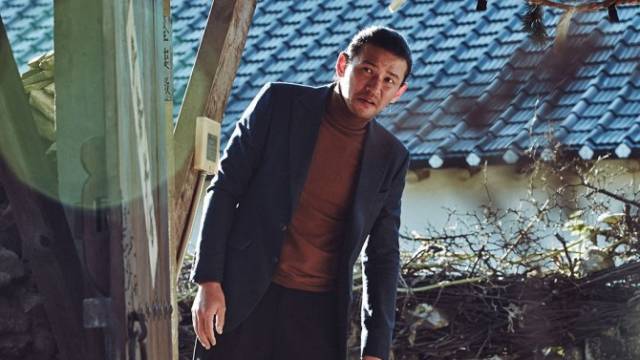 Nervous laughter is usually reserved for dramedies of manner and wriggles only into the best of horror movies. The scares in The Wailing, a tale of impressive genre-blending, elicit laughter just until you realize what’s going on, but by then it’s too late. It is awesomely terrifying. In Gokseung, a county way south of Seoul, bumbling police sergeant Jong-goo (Kwak Do-won) is called out into the miserable morning downpour. There's been a murder. He exhibits an embarrassingly weak stomach, but it turns out his response is an acceptable one; the crime scene is astoundingly grisly—the traditional house in shambles, strewn with victims viciously stabbed. The bodies are streaked with blood, a real deep maroon not B-movie scarlet, and stippled with oozing bumps and boils. It’s an unsettling introduction: the stuff of crime dramas with a touch of medical mystery. The surviving victims are later subject to seizure. The violence deviates from the genial humor of the preceding scenes, something out of a buddy cop movie. Buffoonery is very much present throughout the rest of the film if you can believe it.

Na Hong-Jin (The Yellow Sea, Chaser) is a masterful director who orchestrates the scenes to extract our raucous peals of laughter which wilt into nervously delayed chuckles and dissolve into a dead silence on par with the seemingly peaceful village. The film is deeply unsettling, terrorizing your psyche in a way that most horror films haven’t in years. It is bereft of soundtrack and cheap quick cuts. Nothing lurks around the corner just for kicks. This is a slow burn scare and it is entirely thrilling.

What appears to be serial killer whodunit soon morphs into a full on exorcism movie as more villagers are murdered, usually at the hands of a family member or someone close and Jong goo’s sassy young daughter (Kim Hwan Hee) soon evinces signs of evil, at first psychological, a dazed stare, an aggressive outpouring of obscenities, then physical--that familiar rash. He eventually hires a shaman (Chun Woo-hee) who performs an exorcism in hanbok dress with drums and gongs. It is a sight for sore eyes that have witnessed too many stoic priests and their crosses, though there is one those in this movie, too. The suspect is a lone Japanese man (Jun Kunimura) who lives in the woods and may or may not be a ghost according to the townspeople. Na's script knowingly reflects and captures gripes of Korea and Japan's centuries old relationship.

The plot goes off the grid and the last third dotted with biblical references to pay off the film’s introductory verses from Luke makes about as much sense as Prometheus without the possibility of a sequel. Yet despite the intended ambiguity of the ending, The Wailing is worth every second of its 156 minute run time.  The visuals too—courtesy of frequent Bong Joon-ho collaborator Hong Kyung-po—are sophisticated and gorgeous, encapsulating both the monstrosity and beauty with mountains peaks and verdant hills shrouded in mist cementing the fact that terror has taken hold in such an idyllic and Edenic place. Na holds onto his shots and when a red-eyed man (or creature) comes close to the screen he doesn’t pull away, and neither can we. Is it a waking dream or nightmare? There’s no escape either way.