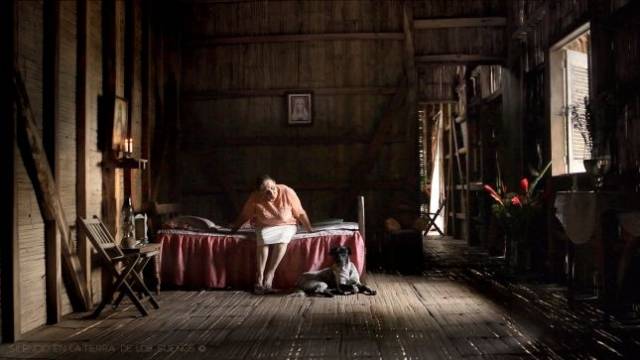 Silence in Dreamland earns the right to be nestled under “slow cinema” with its dearth of dialogue and longish takes, though not nearly as measured or ponderous as other subtropical climate-set films by Tsai Ming Liang or Aphichatphong Weerasethakul. It makes sense that the film, plotless in the vague arty sort of way, was Ecuador’s foreign language film submission for the 87thAcademy Awards. Silence in Dreamland trails an older woman (Bertha Naranjo), nameless of course, through her daily routines. She makes her bed with care, sweeps the front landing, cooks, and takes her meals alone. Though human contact is within reach—neighbors, passersby, a bolero trio whose lyrics none too subtly pertain to her current social life—she speaks with no one, excepting the Lord in prayer aloud. Once in a while, she smiles while watching television, old talk shows in black and white. Her home is comfortable and unwanting of anything, except perhaps some company.

When she's awake, the camera casually follows her in unbroken takes, director Tito Molina’s primary mode of filming, until shifting to a less agreeable shaky handheld camera when she passes into slumber. Her dreams are punctuated by views of the ocean and contradictory to the film's title, dreamland isn't silent, but clumsily obtruded upon by classical music. The seams of a plot take shape when a homely canine crosses her path and the two become fast friends, walking the beach, taking in the sunbeams. She experiences something like contentment. Or is it all a dream? It becomes difficult to differentiate reality from fantasy, an intentionally blurry line that is further disintegrated by cinematic decisions. Molina frequently employs different angles, making the interior of her home not readily recognizable at first glance, and thus hard to distinguish what might be a dream, and if they are solely restricted to the water. He might do better to establish a visual pattern.

The quotidian does not always have to be tedious, as filmmakers have proved time and time again. Silence In Dreamland isn't dull, but it isn’t exactly engaging either.  It is lyrical in mood, but thematically unpolished. First time actress Naranjo has trouble commanding the screen, though not necessarily a fault of her own. She seems a fixture in her home, rather than a living being. Even the most normal subjects can be riveting in cinema. It’s a trick of the camera, and one that the director has not yet perfected, though what is on display in this first feature shows promise for the Ecuador's nascent film industry, which has taken giant leaps in the 2010s, as its feature film output though meager by Hollywood standards has skyrocketed. Silence in Dreamland is a step in the right direction toward building a new cinema.