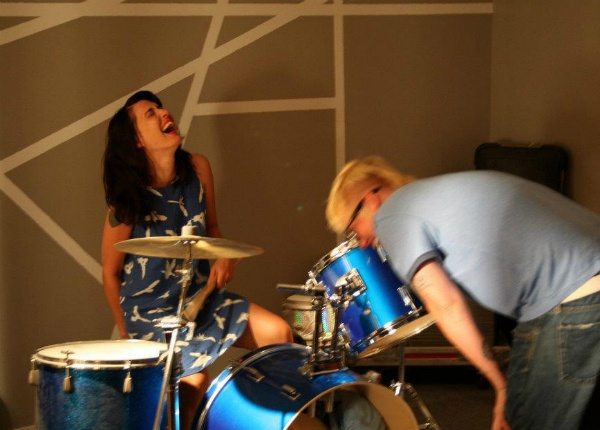 In "The Punk Singer", director Sini Anderson crafts an endlessly entertaining and revealing documentary about Bikini Kill and Le Tigre frontwoman Kathleen Hanna. From her importance as part of the revolutionary Riot grrrl movement, to her current role as a Lyme disease activist, Anderson allows Hanna to slowly shed away the layers that have made her one of the most fascinating and enigmatic figures in contemporary music. We spoke to the first time director about her process, working with Kathleen and how to walk the fine line between being a fan and an objective filmmaker.

You worked on this movie for about three years. Why did you decide this was a good time to tell Kathleen’s story?

Sini Anderson: Kathleen’s a pretty influential artist to a lot of people and I feel that in terms of where feminist politics were when we started the production, it was a really good time to tell her personal story. I thought it’d be motivating to the movement and I was just really personally moved by Kathleen’s story. I figured other people would be as well.

Kathleen’s a fascinating woman but she is also seen as a symbol. As a first time filmmaker, how did you achieve the right balance between portraying her as an icon without taking away from her human side?

SA: She makes that pretty effortless because in the 90’s there was a scene of “the personal is political” so I don’t see a lot of separation between her person and her personal experience and her art. They blend together so much that you can’t separate one from the other. Knowing that about her made a little bit more simplistic to just give her enough time in the interviews, to talk and come to conclusions. Almost every topic that we talked about had a very personal element to it and a really artistic element to it.

As a fan of her work was it hard to deliver a movie that’s not only not reverential but also allows the subject’s dark sides to arise?

SA: I’m a big fan of feelings and processing them (laughs) and making it through very difficult experiences and coming through on the other side with something that feels like a victory and can feel inspirational to other people. With Kathleen and her work and telling her story it didn’t really have to operate from a place of “oh, this can’t come from a fan perspective” I just wanted to go deeper. I wanted her to come to her own conclusion and there were times when Kathleen would have moments of complete silence, and my DP would ask “should we cut” and I told them “no, let it keep going”. Letting her answer the questions the way she wanted to answer them helped explain a lot to people who are fans of her work. I’m a fan of her work and I’m a huge fan of her person, but I’m not the kind of fan who gets starstruck. She’s my friend and I feel like I understand what’s behind a lot of her work and I identify with it. 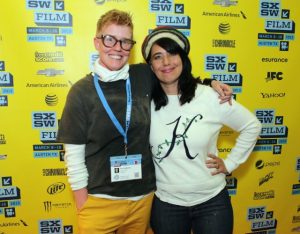 SA: The goal was to try to bring attention to Kathleen as an artist, musician, feminist to people who don’t know her work. I knew that people who were fans of her would find it. I wanted to make the movie open enough so that if you didn’t know who Kathleen was, it would still hold your interest.

I’ve heard many girls say that Bikini Kill is not music for guys. Do you feel that somewhere along the way some people have misinterpreted Kathleen’s intentions with her work?

SA: That’s probably been the experience of many people because Kathleen’s work means a lot to a lot of people. If they identify with what she’s singing about, and it happens to be this very personal situation like sexual assault and rape, I think that depending on the person receiving the message, it would make sense that some might become extremely protective, like “this isn’t for you, this is for me”. But I don’t think the intention of Bikini Kill was that, they were definitely speaking to younger woman, saying “girls to the front”, but that was more about starting to shift what had always been than it was about keeping somebody out. Kathleen has never wanted to keep men out of her shows, or out of the movement, but it was radical to sing to other women and say “this is for you”. If you turn the TV or the radio, it becomes obvious that what we’re being fed is meant for straight white men, even when it’s meant for us it’s done poorly.

In your movie you reveal how the media assumed that everything Kathleen sang about had actually happened to her. Why do you think that the media allows men to be “creative” but implies that women can only talk about their own experiences?

SA: We totally live in this ridiculous, sexist society. I’m a total fan of emo music but when you think about it, it’s like “sad guy music is endearing and sad chick music is depressing”. Wait, it’s totally endearing and sweet for a man to be sad but a woman to be depressed is depressing? It’s just part of the society that we live in and they’re always gonna sensationalize the dramatic parts of a woman’s story, especially if she’s remotely sexy or good looking. It’s a fact, if you’re not good looking people are not gonna listen to you, for the most part. Kathleen is beautiful and also happens to have a powerful political message, so people are paying attention but they’re not gonna take the sensationalization out of it, in fact they’re gonna be drawn to it. A great example is the change that’s been made by Kathleen’s work is that when this film came out a lot of the journalists that were writing about it were people who had been personally inspired by Kathleen, which is great because twenty years ago they would’ve just objectified her or talk about her fashion. Now, they come in and ask smart, political questions.

You have said you got all your feminist values from your friends and family as opposed to academia. Can you elaborate on that?

SA: I grew up in Chicago really poor and decided to leave school at a very early age. I didn’t go to high school or college and I was a dancer, so I was exposed to art through dance and I was just a seeker, so I continued to look at art and critique it I was drawn to feminist art but I’ve been a working artist since I was fifteen years old, so I never had the time to stop and go to university so all of my education - that I feel is pretty wide about music, politics, film - has come from my peers.

There are no great documentaries about women artists. Where did you draw inspiration from to make your movie?

When you set out to make the movie, is this the movie you thought you would make originally?

SA: No definitely not, but I’m very happy with it.

"The Punk Singer" opens in theaters on November, 29. Read our review here.