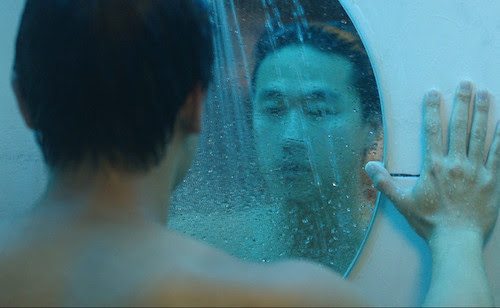 Spa Night slyly opens amidst the sauna fog where a male body with a toweled head lunges forward with strained exhalation. But then, the towel is plucked off to revealed a young male not engaged in any sexual activity, but soaking in the steam with his father—perhaps an equal shock, this norm in Korean spa-culture, to its viewers. Andrew Ahn's feature debut can feel like a checklist of all things Korean, chock full of rituals and totems like respectful drinking etiquette (pour with two hands, always), church service and cram school, a baby's first birthday or dol ceremony, subject of the director's short film. But there's also a concealed rage that masks itself in public. Repression all around, that only bubbles to the surface.

Model son David shuffles his feelings at the soft behest of his parents. Turning down tables and scrubbing his dad's back, David's filial piety and obedience could make him something of a pushover, but Ahn does his best to show the circumstances and context that would lead to such a disconsolate state.  Money troubles is one. The expensive pursuit of higher education another as David's parents enroll him in an expensive SAT class they can't quite afford. He doesn’t fit in with his childhood friend, now a USC student, whose mom namedrops the college five times per sentence.

Faring better than the rest of the cast, first time actor Joe Seo is impressive at playing a woe-begotten teen. His face is canvas for the curiosity and disappointment, self-reproach and yearning, and hard work of a life where there's little triumphs (or humor) to deflect from the endless misfortunes that unfurl and bake themselves into David's psyche. Are his parents aware of his turmoil? They are concerned, but there is little they can do to ease their own burdens much less their son’s.  He takes on a menial job at an all-male spa that serves as a cruising spot. He doesn't get as far in this realm as you might expect.

Spa Night takes its time letting David’s desires to build up, reminding us that this is more than a coming-out coming-of-age story as it alternates and intermixes the struggles of immigrant life, and the particular old-school condemnations of nontraditional masculinity with David's burgeoning sexuality until an disruptive end stifled by shame and anger. The film's only real emotional release is appropriately stunted like David's fist slamming on a counter top. It is not exactly explosive but it rings into the night.