September 29, 2014
Film
A Visit to "The Little Bedroom" with Directors Véronique Reymond and Stéphanie Chuat 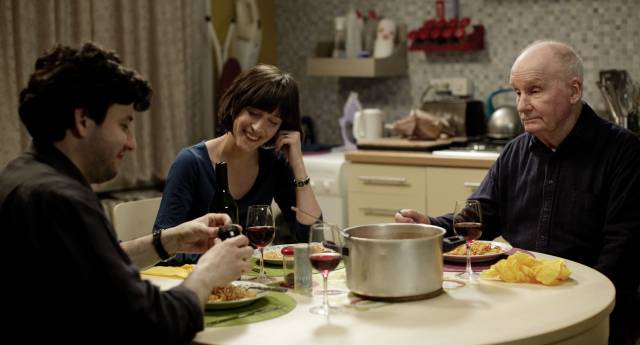 When The Little Bedroom directors Véronique Reymond and Stéphanie Chuat walked into the room, they were instantly warm. Véronique and I chatted about her scarf (with little yellow owls on it) while Stéphanie told their publicist about the new flat (they had just flown into New York the night before). The Little Bedroom was made in 2010 and is only now making its theater debut in the US (read our review here). It is a quiet story about the relationship between a young female nurse (Florence Loiret Caille) and her elderly male patient (Michael Bouquet).

I know that you’ve collaborated on other projects, but this is your first feature; can you talk about that experience, what you learned, and what was different?

Véronique Reymond: It’s much longer than the other projects, especially to write. And also, it was a challenge learning how to collaborate. We’ve known each other since we were 10 years old, so we are very good friends in fact. But still on each new project, it’s a new collaboration because we never know exactly how we are going to make it happen. On this precise project we did everything really half half, the writing, the directing…

Stéphanie Chuat: When we wrote this project, we really worked together, it’s not like one developed a part and sent it to the other, we were really sitting at the table all along. We just did a TV series, so we changed a little bit because it was so huge. But for The Little Bedroom, on the set, it’s interesting because don’t split the work. We don’t say “you do this, you do that, you speak to the DP, you speak to the actor.” We are fresh after each take, and we sense each other very well so we don’t need to talk long but we consult and then who goes to speak to whom depends on the mood of the moment, because on some days you might have more connection to this actor or the actress.

Are there strengths that each of you has personally that you bring to the project?

Stéphanie Chuat: When you’re in the “emergency” process, then you really have to go straight to what you can do the best. And for the TV series at some point it was like this. It’s true that Véronique has this ability to be sometimes nearly autistic or closed off for writing, it’s really important to make a bubble and focus. She can do that very well and I love to do that with her but if I feel the project is not moving forward, it drives me crazy. You know like sometimes you can write as if you're writing a novel in your room and then you find an editor and then you will see what happens but you have to finish the novel first — but when you do a movie, everything is at the same time, you can’t finish your script and see what happens, so I’m more the exterior part of the duet.

Stéphanie Chuat: Yeah, and also production, I’m more into that right now. Which makes our duet very interesting through the years, I think, because it moves. It’s not rigid.

The screenplay and performances seemed to be extremely grounded in reality, and I just wanted to ask what sort of steps you took in researching, was it very personal? Were you connected to the characters?

Véronique Reymond: First it was really the relationship between an old man and a young woman, and this relationship between the nurse and the old guy who doesn’t want to leave his apartment, and this symbolizes independence and freedom. This is something that we are very often confronted with in Switzerland. You have many old people who don’t want to leave their flats because it’s their whole life. So this is a place where we had a lot of personal inspiration. Both my grandmothers, [Stephanie’s] grandmother, also her neighbor — she has a very, very nice neighbor just below her apartment and he has this Edmond character type and it’s very interesting to see how he can deal with his age. And the other story with the baby, came later, and it’s not a personal thing it’s really because we wanted to have this balance between the end of life and the very beginning - the before beginning - of life and what can happen when it just stops. And you have two kinds of grief, he who has to leave something and she who has to rebuild her life.

Stéphanie Chuat: But it’s not like a catharsis, like you write something because you went through something similar, it’s not a personal story.

Véronique Reymond: We had to do a lot of research for it.

Stéphanie Chuat: We met a couple; it was so strong because the woman was 8 months pregnant with her second child and with her husband they told us about how they lost their first child. So you have this pregnant woman crying, really crying, and we had the privilege to be the first people they told their story to. And the moment when Rose tells Edmond what happened in the hospital, it’s really reality, we couldn’t have written those words without her. They’re nearly her words.

Véronique Reymond: And when she came to see the movie, this was so touching, with her whole family, and she said “when I heard her it was like me” and I said “yes, it’s you.”

That moment was so powerful; Caille’s performance overall was incredible. She was very poised and graceful in her despair and I thought that was extremely poignant. Was the lack of tears a directing choice?

Véronique Reymond: Yes, we worked with her a lot because she’s very emotional and it was hard to find a way to transmit the emotion without being overwhelmed by it. And also to be able to cry but late in the movie. Because if you cry all the time then the people cry with you but then they are exhausted. At the climax of the movie when you really want people to be with you, they have cried too much and they won’t — so it’s a balance of emotion, it took a lot of work but she’s a great actress, it’s amazing.

I also wanted to ask about the particular lack of judgement in the story writing and direction. Your characters do things that might, in other films, be considered polarizing or “hot button issues” such as suicide or infidelity, but in The Little Bedroom these events are simply treated as a part of life, without bias.

Stéphanie Chuat: For us, this aspect was extremely important because when you are going through something painful, you behave in a way that maybe people outside wouldn’t understand but you follow your state. Edmond and Rose connect exactly with this, actually, it’s really this hold which connects them and makes them do things which, of course, are not normal *chuckles*

Véronique Reymond: Yeah, many people do things that can hurt other people but when you are with them, emotionally, you completely understand why. A good example is the character of Edmond’s son who has to make decisions for his father and feels like the bad guy.

How do you feel about Edmond’s son’s character and his actions?

Stéphanie Chuat: It was very difficult to write in order not to make him the cliche bad guy, and I think when we had audience reactions and some felt very close to this character, I was very happy about because they could really connect with this ambiguity inside the character. It’s not all black or white, he’s really in the middle and torn between “I have to live my life or I have to stay at your service and now it’s time for me to live my life" and he’s nearly already 45-50.

I’m not so familiar with the atmosphere in Switzerland but I’m wondering if you faced any challenges as female filmmakers and if so can you talk a little about that?

Stéphanie Chuat: The first challenge we had actually was not connected to being women, it was the subject of the movie. The producers at the beginning said “nobody will go to the movies to see this,” but the film was a huge success in Switzerland so the producers were completely wrong.

Véronique Reymond: They said it was too heavy and we always said “no, no, no, it’s not heavy, it’s life.” and this was the most difficult thing. But afterwards, yes. It’s difficult to be a woman because you have to deal with how to direct, how to be the boss, it’s an every day kind of readjustment. We very much like working with men though.

Stéphanie Chuat: Sometimes men need to tell you how you should do things, you know, they have this patronizing thing which, I don’t know makes them feel secure, but sometimes it’s difficult when the producer comes to set and he speaks to the editor who is a man and he doesn’t speak to you and little things like that — I remember on “The Little Bedroom” one of the producers came and was speaking to the sound guy about some stuff which concerned us. But you know in Switzerland, the Quartz (the Swiss Film Award), which is like the Oscars, since 2009 there were nearly only women who were winning the best fiction film, 4 to 2, I think, so it’s not so difficult.

The last thing I wanted to ask you was about your most recent project, the TV series A Livre Ouvert, which has just come out on television this August in Switzerland, that must be very exciting…

Stéphanie Chuat: Yes, because each week we are wondering what the audience thinks…

Véronique Reymond: The big challenge, because it’s really our first TV series, is how to make the audience addicted. It’s completely different to a movie. For a movie, people come to the theater and normally they stay from beginning to end if everything goes alright. On TV, you have hundreds of other possibilities and if you want to see something else you just have to hit the remote.

The Little Bedroom is now in theaters.