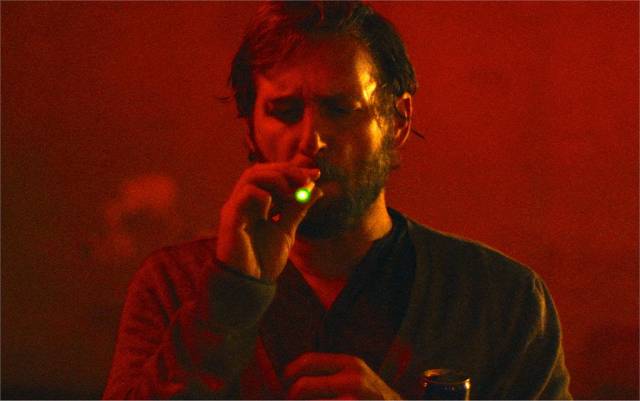 John Magary’s directorial debut follows two brothers as they kinetically drift in and out of concentric circles of resentment and failures with girlfriends in tow. Though laudable for its mood, feverish and electric, The Mend lacks narrative focus, milling about like its characters. Wearing a ratty t-shirt and pushing the seams of his tight leather jacket, older brother Mat (Josh Lucas) looks like he might suffer from alcoholism or lunacy.  Lucas is magnificently feral in this turn away from niceness, literally dragging himself along the subway platform in upper Harlem on his way to crash (though he’s been invited) a party at his brother Alan’s (Charles Plunkett) apartment, where most of The Mend takes place. A shame that Mat turns out to be all snarl and no substance.

If Mat is a nebulous ball of rage, Alan is his tame foil, a wiry lawyer, belittled by his girlfriend Farrah (Mickey Sumner). When he's caught reciting a critic's opinion as his own, they end up quarreling in front of their guests. The general gist being that Alan is an unformed human being. While mildly awkward, the exchange lacks proper tension and stakes. No matter though; the film doesn’t purport to be a tale of manners or psychology. Had Magary more carefully pursued this route—darting glances, bitter resentments, father figures– the resulting film would have landed in closer territory to the irredeemable bastards of Brooklyn in the nuanced films of Noah Baumbach, or Alex Ross Perry. A loose but inaccurate judgment, as the movie avoids probing for genuine emotions, the siblings' self-involvement doesn’t run deep enough to warrant an (interesting) character study. It also doesn’t help that neither brother can lay claim as the jerky lead.

Instead The Mend after its first act, devolves into a mood of mania and fear, approximating Mike Leigh's Naked more than Greenberg. Alan and Farrah jettison to Vancouver, leaving Mat to wreak havoc (mostly by failing to clean up after himself) in their shabby apartment - beautifully shot by Chris Teague - with the look of  high antique gloss. When Alan returns sans girlfriend, the brothers freely slack in squalor, drinking, fighting, and cajoling others. Their sense of humor is acerbic, full of non sequiturs, and often not very funny. Other puzzlements include the abounding iris shots, and the slim threat of a romantic triangle with Mat's girlfriend Andrea (Lucy Owen), armed with a crazed twinkle (of mischief or mania, again unknown) in her eye.

A sense of terror pervades the film that never fully materialized. The ever-present whir of helicopters and a fugitive mouse hint at destruction. Something sinister even seems to lurk beneath the excellent original score by Judd Greenstein and Michi Wiancko. Staccato strings and plunking piano keys match the in-and-out flicker of electricity, ultimately a harbinger of nothing. The Mend lacks true mayhem or insight, resulting in a repeating scherzo without a coda.