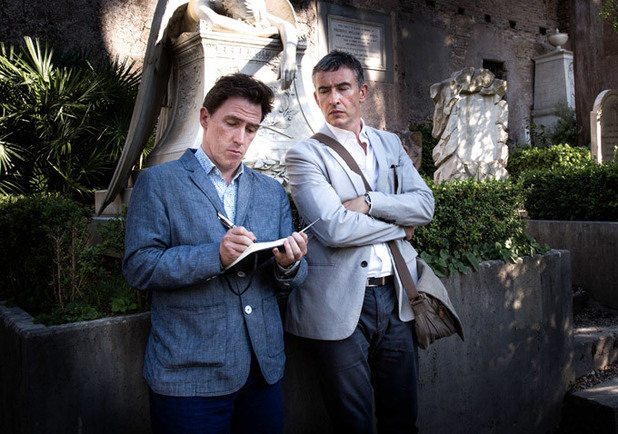 Steve Coogan and Rob Brydon return to our screens in the comical culinary adventure The Trip To Italy. Following in the production footsteps of the original series this second installment produced for the BBC has again been edited into a film version, and the results are those of hilarity, gluttony and polite British awkwardness. Adding a little method to their madness Coogan and Brydon follow the coast of Italy from Liguria to Capri retracing the footsteps of romantic poets Lord Byron and Percy Bysshe Shelley. Brydon rents a black Mini Cooper for their journey (akin to those in The Italian Job) which Coogan assumes he has done solely for the purpose of justifying his hilarious and plentiful impersonations of Michael Caine. Of course Coogan is correct. One of the funniest scenes of the film takes place in the first 10 minutes, when sitting across from each other at their very first luscious Italian meal in Piemonte the two have a rather extensive Michael Caine impersonation verse-off. If imitation is the sincerest form of flattery Michael Caine must be feeling very well loved.

The journey is dotted with not only culinary delights and fantastic scenery but with chance meetings, phone calls to home, and co-worker and family visits - one of which is Steve Coogan’s teenage son, the others being Coogan’s assistant and the professional photographer used in the previous series. Brydon also receives the chance to audition for an American Michael Mann film whilst on the road (his first foray into American cinema) and asks Coogan to help him film his audition tape, which he does with jealous chagrin. Along the way they visit such iconic sites as Lord Byron’s house, the beach where Shelley’s funeral took place and his eventual gravesite, Pompeii, Catacombe de San Gennaro and various locations from the film Roman Holiday. The final scenes involving a decadent, sun-drenched seafood meal on the balcony of Il Riccio in Capri inspire you to make haste to the nearest airport with nothing but a credit card and some swimwear.

The obvious beauty in this film comes from the surroundings. The food and wine are sumptuous and the vistas are outstanding. The panoramic shots whilst they are cruising along the coastal roads in their Mini are nothing short of spectacular, and the scene where they sit atop the Terrace of Infinity on the Amalfi Coast and contemplate ‘la dolce vita’ is awe inspiring. On the flipside a huge part of the beauty in this series is the relationship between the two men and the experiences they have in regards to loved one’s whilst being on the road. The new and exciting experiences they’re having are often a stark juxtaposition to what is going on in their real lives in regards to both family and career. I find the melancholy and awkward conversations that stem from this to be heartfelt and endearing. It’s obvious the two are playing exaggerated versions of themselves for entertainment and comedic value, but I’m sure it stands to reason that some of what we’re seeing is the truth. Just as I’m sure their selection of Alanis Morisette’s Jagged Little Pill for their road trip sing-a-long music is partly for comedic value but mostly due to common personal preference.