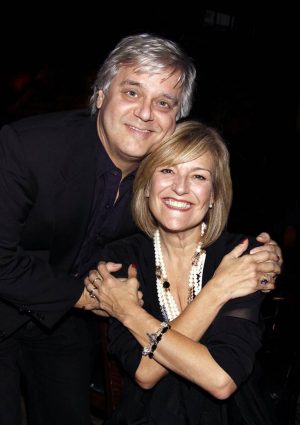 When Broadway star Karen Mason says she has a big voice, it's not an understatement. Mason has received much critical acclaim for her performances in Broadway musicals like Wonderland, Mamma Mia!, and Sunset Boulevard. She's also a highly successful cabaret performer and concert artist who's released seven albums - all produced by her singer/songwriter and award-winning record producer husband Paul Rolnick. Rolnick recently released his debut solo album, Shoot For the Moon, jointly with Mason's newest release: It's About Time. Rolnick and Mason took a break from their musically-active lives to talk to us about producing their newest albums, performing in different spaces, and supporting each other musically.

Karen, you’ve recorded a lot of albums. How did you choose the songs for It’s About Time?

Karen Mason: Well, it had been nine years since I had done a CD, and I knew I wanted to do a new recording. But this one started when marriage equality passed in New York state. Some friends got married -- they weren’t friends at the time, they were hiring me to be entertainment at the wedding. And we had dinner with them and really adored these two gentlemen. And as we were walking away, I said to Paul, who’s a songwriter, “You have to write a song for these guys. This is a perfect opportunity.” And he had a hook in his mind of: “It’s about love, it’s about life, it’s about time.” And he got in touch with one of his collaborators, Shelly Markham, and they wrote this great song and I loved it. I’ve sung it since then -- I’ve sung it actually at quite a few other weddings, and I really wanted it to be down on a CD. And once we were doing that, you know, Paul is a producer and a songwriter, so he’s very comfortable in the studio and he takes me there. And so when we picked the songs for this, somehow, you go through the songs and you go, “I like that one, I like that one, I like that one.” It’s like picking anything; it’s hard but you trust each other in your choices. I mean I was lucky in that Paul really does the yeoman work in putting it all together.

So, one of the songs that I really liked was “Finding Wonderland.”

You played the Queen of Hearts in that one, right?

And I heard your costumes weighed like, 15 to 20 pounds?

And then towards the end of the play, you had three really fast costume changes.

Were you kind of relieved when that show was over? I mean, I’m sure it was sad, but you didn’t have to wear those costumes anymore.

KM: You know, it’s funny. I think my neck was happy, because of the weight of the costumes. But I loved that show. And I’d been with it for the two years that we had been doing it off and on, in Tampa and Houston. I loved the company. Even though they weighed a lot, I loved my costumes. I loved my songs. I mean, you know, Frank Wildhorn and Jack Murphy wrote “Off with Their Heads” with me in mind, and I did love being part of it. It was sad to me when it closed. It was sad to me when it really was altered from Houston to New York. You know, they really, in a very short period of time, made a lot of changes on the show. And I kind of liked the mess that it was before. I thought it was kind of a magical mess.

That kinds of fits with the Alice in Wonderland story.

KM: Yeah, trying to make it into a very clear, straight story, I didn’t think worked. But I did love that show. I would have been happy being in that show for a while.

You’ve played a lot of characters with really big personalities, like the Queen of Hearts, and Norma Desmond, and I think you were Mama Rose in Gypsy?

Do you think any of those big personalities have rubbed off on you?

KM: (laughs) Well, you know, here’s the thing: I probably have what most people would call a big personality to begin with. So I think it was just finding different aspects of that big personality to play those women. With every role I play, I do feel like I learn something new about myself, which is always an interesting journey. With Norma and with Mama Rose, I think you try to incorporate a little bit more fearlessness into who you are. And try not to walk away with the imperiousness of Norma Desmond and the delusional quality, but you want to walk away with the strength, the survival instinct of those women. And I think you learn something from every role you play.

I wanted to ask you a little bit about your cabaret performances. I know you’ve said you enjoy doing both cabaret and Broadway. So what’s your favorite thing about performing in the cabaret space versus on a Broadway stage?

KM: The intimacy. Certainly the cabaret stage is a more personal connection to the audience. In the theater they call it “breaking the fourth wall,” and in a cabaret, the way that I like to perform, there is no fourth wall. It’s a very personal communication. And I love that. It scared me at first when I started singing in cabarets, because people are very close and right in your face. It can be rather intimidating. So I think when I first started, basically my head was down. I didn’t want to look at people. I just wanted to be involved in my music. And now, over the years, I’ve learned that it’s very important for people to be able to share it with you.

Paul, you’ve mixed and produced albums for a lot of different artists.

Paul Rolnick: Indeed, I have.

What’s it like to be doing your own album?

PR: Very tricky, which is why it took me a very long time to decide to do this. And frankly, the reason my album is released is because Karen one morning said, “You should put out your CD when I release my next one.” And I thought, well that’s crazy. And then I thought, why the heck not? And here’s why I think it’s tricky: I don’t think any of us who is a singer really understands the innate quality that our voice has. In other words, you carry the instrument inside of your body, you know how you sound – sort of. You know what your vibrato sounds like. You know when you’re sharp or flat. But you really don’t know how people perceive the quality of your sound. And so it took me a lot of years producing and mixing and directing other people’s projects until I finally felt comfortable enough to do that for myself.

Did you kind of feel like you had some insider information when you made your album, since you’ve produced for so many different artists?

PR: Well, I’m really known as a vocal producer more than anything. And I know how to shape a vocal, so I’d reached the point where I kind of knew I could do that for myself. I had the years of experience of working in God knows how many different situations with different artists, some with huge voices, some with small voices, some just on the brink of hitting their prime, some well past their prime. And what I always want to do as a producer is be the artist’s advocate and their best friend. So I always want to present them in the best light possible, and it was time to do that for myself.

One of the songs on Shoot for the Moon is “Believe in What You’re Dreaming,” which you wrote. And I was listening to this song and it felt a little autobiographical; it’s kind of about reaching for your dreams and believing in yourself, and you’ve helped a lot of artists do that. Could you tell us what the inspiration was behind that song?

PR: Well, actually that was a song that was written with a buddy of mine that I was singing and writing jingles with – Michael Edwin. And he and I just got together and banged out this song. We were both music guys, so it was kind of a pitch and catch thing; we’d trade phrases, we’d trade ideas. And when we got done, we had a song that we thought was kind of inspirational, and kind of spoke exactly to what you’re talking about, which is believing in yourself and believing in your friend or your significant other’s path, and just being supportive of that.

You both sing the song “It’s About Time” on your albums. I was wondering, since you both did it, if you went out of your way to make your two versions different from each other, or if you just didn’t worry about that?

KM: The thing is that just because we’re different artists, it’s going to be different. And so the tracks are different, but just because of the way we approach songs, and what we bring to it will make it different. So I don’t think you ever really have to worry too much about that.

PR: Not at all. I mean, look, I’ve got a pop voice, and Karen has a very rich voice, very much like Adele, or a young Barbra Streisand. So you have to kind of know who your artist is. I mean, as a singer, I’ve got a huge range, but it’s not a theater voice. I’ve never aspired to that. Although when I’ve taken lessons with vocal teachers, Karen studies with someone who’s brilliant, Bill Schuman, who works with a lot of opera singers, and within ten minutes he was telling me, “If you’d gone classical, they would have made you a Rossini tenor because you have all those upper notes.” And I said, “Yeah, well instead I sang a lot of ACDC.” So it’s just a matter of what turned you on when you were a kid, and what you wanted to do musically, and where your passion was. And then finding out if it was a fit for what you actually had. And it certainly was a fit for Karen. And I’m pretty happy with what I do too, so I think we both got lucky.

To order It's About Time and Shoot for the Moon, visit: https://www.karenmason.com/ and https://www.paulrolnick.com/

Karen Mason performs Sundays and Mondays in May at 7:00 p.m. at Don't Tell Mama. For more information and to buy tickets, visit: https://www.donttellmama.com/ And both Paul and Karen will perform at Davenport's Piano Bar in Chicago, May 17-20: https://davenportspianobar.com/make-reservations/