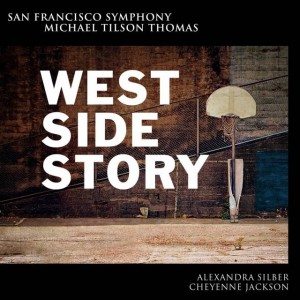 West Side Story is such a New York institution that the idea of a West Coast production overshadowing anything heard on Broadway sounds downright sacrilegious, yet that is precisely what the San Francisco Symphony did in 2013 when Leonard Bernstein-protege Michael Tilson Thomas conducted a series of concerts in which the 1957 score was performed in its entirety for the first time in decades. In the summer of 2014 a recording of the event was released (recorded live between June 27-30 and July 2, 2013), and it was perhaps the single most magnificent musical-theater album of 2014.

Making the arrangements more Broadway and less operatic than the 1987 recording conducted by Bernstein himself, Thomas recruited some of Broadway’s greatest talents including Cheyenne Jackson and Alexandra Silber as Tony and Maria respectively. “This is a new and rare opportunity to hear Bernstein’s complete score sung by a sensational young cast and a knock-your-socks-off orchestra” Thomas explained, and he’s absolutely right.

From the moment you push play and let the sounds of Bernstein’s New York City take over you, it becomes clear that this is West Side Story like you’ve never heard it before. One would think that Jerome Robbins’ vibrant choreography and the colorful costumes would be essential to West Side Story, and while some Broadway productions and the Oscar-winning 1961 film are magnificent, one discovers that the music has been surprisingly undervalued to a degree.

The visual aspects take away from the fact that Bernstein’s melodies by themselves are as passionate, violent and intense as any knife fight or rapturous kiss. Thomas’ arrangements make wonderful use of the San Francisco Symphony’s multitude of instruments and allow us to discover elements that we might have missed before, like the thrilling effect of a simple celesta that makes “Maria” sound positively religious. Perhaps Thomas’ greatest achievement is to highlight Bernstein’s many influences, as the score takes on the scope of something that might have been composed by Ravel or Shostakovich.

Needless to say so, Stephen Sondheim’s lyrics are also rejuvenated in the hands of such a wonderful ensemble. Jackson, who was 38 when the recording was made, makes Tony sound like a teenager so madly in love that he can’t avoid singing to express his endless passion for Maria. His take on the part has an urgency that was lacking in Jose Carrera’s more severe performance from the 1987 recording. Silber equally, makes Maria’s interpretations more coy and sweet, than lived in, which Kiri Te Kanawa couldn’t avoid in the late 80s version. Jessica Vosk brings the feisty Anita to life, her rendition of “America” a perfect example of comedic timing and longing. When she takes on “A Boy Like That” it’s hard to believe this bitter delivery is coming from the same woman who took us on such a delightful ride not too long before.

Because the soloists, choir and instruments were all recorded together, the album makes the listener feel as if they were right there in the middle of its creation, the sounds seamlessly blending together to create something akin to a living organism. The thrilling “Mambo” from “The Dance at the Gym” sends electric currents across the room (or head, if you happen to be listening with headphones) and then there’s Julia Bullock’s sublime rendition of “Somewhere”, which elevates the recording to a place of pure ecstasy. Thomas would truly have made Bernstein proud with a recording whose historic value and mastery of form make it the one truly essential musical theater album of the year.