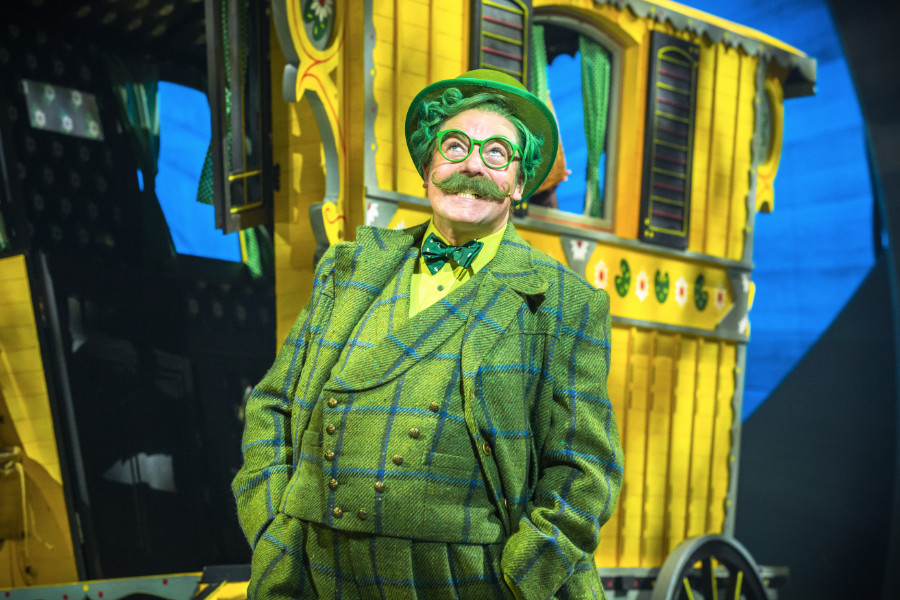 London’s The Wind in the Willows, Julian Fellowes, George Stiles and Anthony Drewe’s musical adaptation of Kenneth Grahame’s classic novel about friendship and forgiveness, was praised for its perky take on the novel. While Downton Abbey writer Julian Fellowes' book drew from the novel’s plot, Stiles (music) and Drewe (lyrics) took their inspiration from the wide history of music, covering musical traditions from carols to rock in their musicalization of this timeless children’s tale.

For those of us stuck across the pond, don’t worry! The soundtrack was made available on June 30th on Masterworks Broadway, making the musical adventures of Rat, Mole, and the rest of the gang available even to those of us who haven’t made it to the West End this year.

Following Rat and Mole’s friendship as they try to save the self-absorbed Mr. Toad from his own worst impulses, we’ve picked out our five favorite songs from the soundtrack:

As the much-discussed Mr. Toad himself, Rufus Hound is one of the soundtrack’s most impressive standouts. The song, which chronicles Mr. Toad’s ride in his beloved new car, is rousing and catchy. Like much of the soundtrack, the lyrics take on a somewhat repetitive quality, but Mr. Toad’s self-laudatory, boisterous lyrics are enchantingly humorous, especially when coupled with Hound’s rich voice. It’s a perfect song to introduce his character more in-depth, giving us a memorable and amusing portrait of Mr. Toad in action.

2. We’re Taking Over the Hall

One of the musical’s rock numbers, “We’re Taking Over the Hall” tracks Chief Weasel (Neil McDermott) in his desire to overthrow Mr. Toad and share his wealth. McDermott leads the song with bravado, bringing extra spirit to this already high-energy song in which the self-proclaimed “downtrodden” of society celebrate their gain at the “fall of the mighty.” You’re sure to be tapping your toes along to their victory with this upbeat number, which opens the second act.

In this smooth-talking and smooth-sounding song, the Jailer’s Daughter (Jenna Boyd) teaches Mr. Toad to fit into his washerwoman disguise by showing him to adopt feminine behaviors. Boyd and Hound riff off each other wonderfully, creating a sense of camaraderie that helps the warm humor of the song thrive. Hound cashes in on Mr. Toad’s classic self-absorption to create a funny undercurrent in the song by translating the more masculine car-enthusiast pride of “The Amazing Mr. Toad” into his ability to “take pride in his feminine side,” praising his own hourglass figure. It’s balanced by Boyd’s equally comical assertions that “he isn’t a beauty.” This moment, though quick, captures the quirks and charms of the musical as a whole.

4. A Friend is Still a Friend

Much of this book’s quintessential charm comes from the way it grounds its plot in deep and beautiful friendships. This gentle number between Badger (Gary Wilmot), Mole (Craig Mather), and Rat (Simon Lipkin) shows the three pals accepting each other’s flaws, bringing that wonderful element of the book to life. Offering forgiveness and acceptance, the friends deepen their bond with this ballad, which offers a soft break from our more upbeat earlier suggestions. With this number, Stiles and Drewe arrive at the core of the novel they adapt, which is celebrated for its slow moments as well as its ability to shift into fast pacing. This song provides a lovely pause in the plot to explore the friendship that is so key to the story, with Wilmot, Mather, and Lipkin’s voices blending beautifully to emphasize that amity.

Mr. Toad, Rat, and Mole band together in their first song together, and it’s one of the best songs in the musical. Backed up by the horses (Natalie Woods and Abigail Brodie), who add an ironic humor to the song’s carefree title through their complaints about their tiredness and Toad’s whims, the three enjoy their travels and the luxuries it offers them. The number captures the essence of their friendship with a bright, upbeat tone, providing a cheerier (though perhaps not as insightful) alternative to “A Friend is Still a Friend.” Between the horses’ frustrations with Toad, the spirit of adventure, and (most importantly) the friendship between the singers, this song entwines many of the elements that have made this story stand out for so many years, enduring today in this soundtrack.