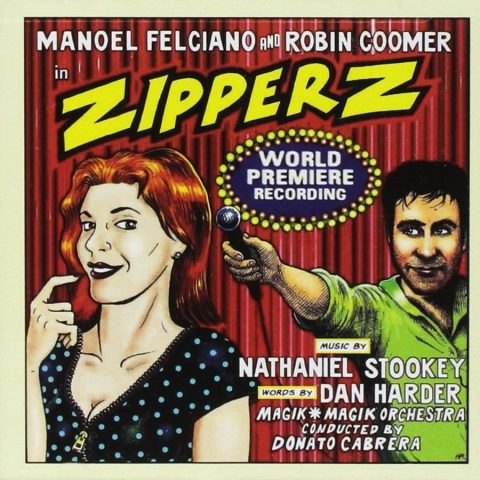 Nathaniel Stookey's & Dan Harder's ZIPPERZ is a sung-through romantic comedy that cleverly blends music and lyrics to achieve a quirky, edgy tone. The story follows a boy and girl through the process of meeting, dating, and pursuing a passionate romance. But if that sounds like it's all been done before, you've got the wrong idea: ZIPPERZ tells the story from both perspectives simultaneously, presenting a sharply clever portrait of the whole process of falling in love -- in all its awkward glory.

The World Premiere recording, featuring Manoel Felciano and Robin Coomer, is now available for your listening enjoyment, and there's a lot of enjoyment to be had. Stookey and Harder have pieced each song together with delightful ingenuity. Often, Felciano sings one line, then Coomer comes in with a contrasting line, but before long, the two lines intertwine - and as they do, the meaning changes. It's best described as the characters describe their first date: "like two actors reading two different scripts at the same time." Only, in this case, the two scripts tend to match up in unexpected ways. This element shows up especially in the songs "Excuse Me, Dear," and "Love Is Blind."

Also delightful is the way ZIPPERZ picks up on all the little things that can go wrong in a relationship and points them out with what appears to be painstaking glee. If you've ever participated in the convoluted mess that is the dating experience, you'll appreciate the humor. One of my favorite moments is the song "But I Don't Call," in which the guy (sung by Felciano) explains why he neglects to call the girl even though he told her he would: "It's a little game: the more she wonders why I don't call, the more she'll wonder what she has to do to get me to call."

Meanwhile, the girl (Coomer) is waiting by the phone in agony, wondering: "Is this some game? That male mania for mastery..." Felciano's character says the goal is to make the girl crazy, but after only a day or two of this game, he admits, "It makes me crazy too." However, he's still adamant that he's "not gonna call." So Coomer's character responds with a classic tactic: "Well, fella, two can play at that game. While you're working out your next move, I'll move on." Now the guy laments, "It's almost as if she doesn't want me to call... Maybe the whole thing's backfired."

Eventually, (spoiler) the guy does in fact call, and after a rocky start to a first date, the two finally progress beyond the initial awkward stage. As they move towards greater intimacy, the music swells to a dramatic crescendo. But then there's the awkward aftermath: what do you do after you've...well, made love in a dressing room....?

ZIPPERZ is out now in digital and CD formats. For more information visit: http://www.sh-k-boom.com/zipperz