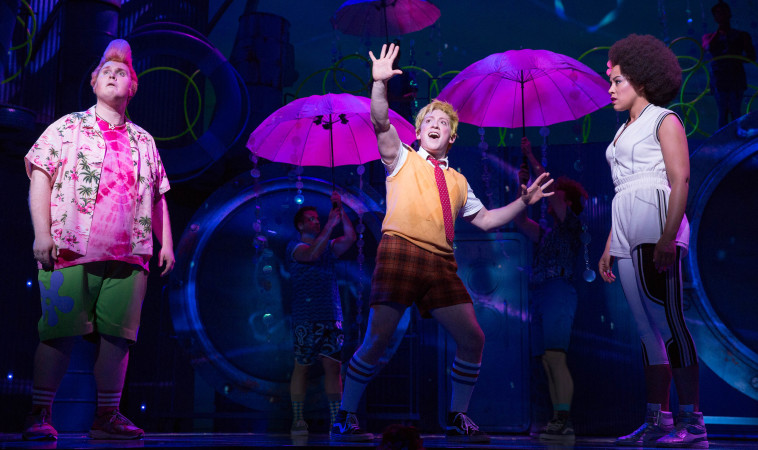 At BroadwayCon 2018, Landau admitted that her initial thoughts were something along the lines of, "That doesn't sound like a good idea," and "How is that going to work?" However, once she heard about the talented artists that would be working alongside her on the project, she began to lose her skepticism. That loss of skepticism, coupled with a childlike joy and imagination, seemed to be the overarching theme of BroadwayCon's Spongebob Show Spotlight - which featured Landau, musical supervisor Tom Kitt, and members of the cast.

Here are five things we learned from the Spongebob Squarepants Show Spotlight:

As a six-year-old, Tina Landau wanted to be either an oceanographer or a theatre director.

She must have done something right, because now she's directing a Broadway show that takes place under the sea. Landau said she sees in hindsight that both career paths ultimately held the same appeal for her: the idea of being in a universe other than that of the waking world - a universe where different rules apply. And with Spongebob Squarepants, it seems she's certainly created a different type of world. Landau said her favorite review of the show calls it "The Lion King on shrooms."

Ethan Slater was too terrified to do the Spongebob voice at his audition.

Ethan Slater, who plays Spongebob, said the prospect of recreating the trademark Spongebob voice from the cartoon terrified him. That's why he didn't go for a direct impression at his audition. However, after he got the part, he had to "do his research" - which in this case involved watching a lot of Spongebob episodes. But Landau apparently told the other actors not to do impressions. She was aiming for something new and inventive, not a carbon copy of the Nickelodeon show (though she said Nickelodeon has been phenomenal throughout the process). 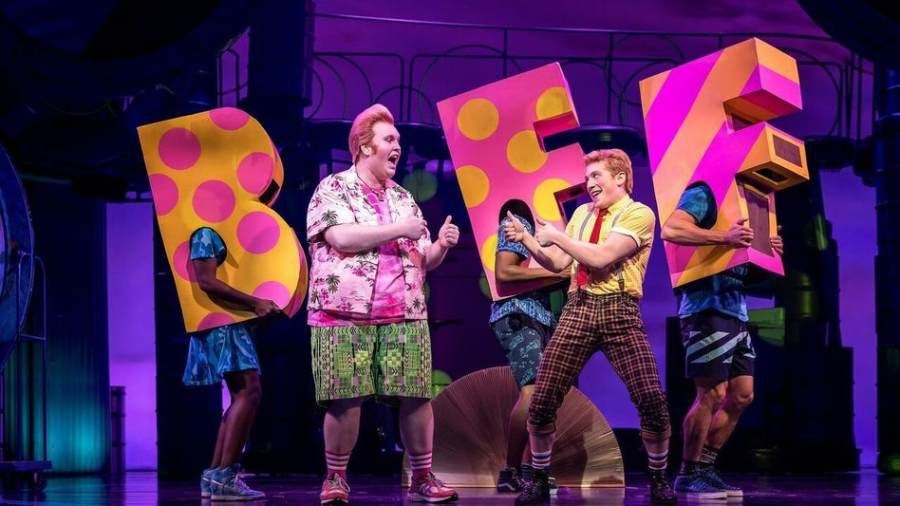 DIY is the new Broadway trend.

Or it is for this show, anyway. According to Slater and his fellow cast member Danny Skinner (Patrick Star), the rehearsal studio was basically a giant playground, filled with things like hula hoops and pool noodles. Landau encouraged the actors to create whatever came to mind out of the toys around them, emphasizing the idea that nothing is stupid. Out of those creative exercises, the show's aesthetic was eventually born.

Landau said she also held a workshop with various circus performers and designers when the show was still in development. When she saw one man building sculptures out of plastic cups and hula hoops, she knew she'd found a set designer.

As a result, the show comes off with an "indie spirit" according to Landau and Tom Kitt. Bikini Bottom, where the action takes place, gives the impression that it's built out of found objects. That lends it a sort of raw, childlike quality, said Landau.

Spongebob is an all-ages show.

Landau said her biggest struggle with the show is proving that it's for all ages: kids, teens, and adults. She thinks an elderly couple could come for a date night and have a great time. But Landau especially loves watching the children in the audience. She said she tries to attend a performance once a week when she's in New York, and she positions herself strategically so she can see the younger audience members. There's one point in the show where actress Lilli Cooper runs through the audience, and Landau will always point to some kids so Cooper can high-five them as she runs past. On one occasion, Landau said, there was a group of kids in the very back of the audience who hadn't been able to see much of the show because they were so far back. They were beginning to lose interest, but when Cooper came out, Landau pointed at them, and the actress ran over and high-fived them - which made the kids light up with excitement.

In the end - Landau, Kitt, and the cast agreed - that's what they want audiences to gain from Spongebob: a childlike sense of joy and connection to others. In an episode of the Spongebob cartoon series called "Idiot Box," Landau remembered, Spongebob finds a TV that sinks to the bottom of the ocean in a big box. He throws the TV out almost immediately and soon spends all his time playing with the box. It was that kind of imaginative rawness that Landau wanted for her show - and she thinks that quality sums up both Spongebob and the theatre world.

Gavin Lee (Squidward) said he finds the show therapeutic. According to him, it's about choosing friendship, compassion, and hope in a world that's falling apart. Landau emphasized the musical's joy and hope, as well as its inclusive feel. Tom Kitt said he views the show as a "meaningful, positive experience" that encourages people to go out and live life to the fullest. In fact, Kitt uses Spongebob's buoyant optimism and friendliness to inspire his own kids. When he and his children learn about all the hateful, violent things going on in the world today, he tells them: "Ignore that stuff and just listen to what Spongebob tells you."

In Manhattan at Palace Theatre NYC

Before we begin our scheduled programming — a review of SpongeBob Squarepants The Musical, now onstage at Broadway’s Palace Theatre for its New York City premiere — pardon me a very brief pop-academic lecture (that I am qualified to give because of a Bachelor’s degree in the liberal arts and many hours logged on fake news websites). Ahem. An inherent problem with “escapism,” a concept touted frequently these days as a salve for political upheaval, is that it is often synonymous with privilege. It is a privilege to be able to shut out or turn your back on the problems of the world because it means these problems — of race, class, gender identity, or beyond — don’t seep into your day to day existence in inextricable ways.   Enter, of all things, a singing sponge. I think SpongeBob Squarepants the Musical is one of the most transgressive musicals on Broadway today, one that lays the foundation for a kind of enlightened escapism that could lead us through this strange era by offering a vision of the best we can be — and pulls it off with bubblegum, shoestring, kazoos, and a whole heap of bubbles.   To create the musical, which premiered the summer of 2016 in Chicago, director Tina Land …Read more