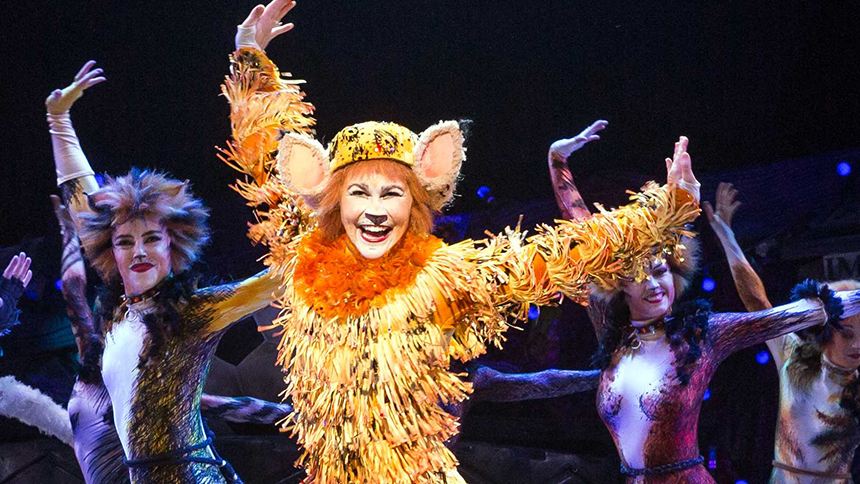 “I think if you love something, start with that!” Sage advice from young Eloise Kropp who is currently wowing audiences on Broadway, redefining the role of Jennyanydots in Andrew Lloyd Webber’s phenomenally successful musical CATS. Each night Eloise dons one costume on top of another for her big tap number as The Gumbie Cat. Ms. Kropp made her debut on Broadway only a few years ago and has since gone from show to show, exciting audiences with her immense talent and charm.

“Start with what you love," Ms. Kropp advised our readers, “but continue to develop yourself in all areas of dance, it’s important to have a strong base in every thing.” Kropp has admitted she came to ballet last, with tap being her first love, then jazz. “My first teachers were a couple, she was the dance instructor and her husband taught acting classes, which I took as well. So, I learned early on that I had to be well-rounded, I was just really lucky with my early training.”

Kropp came to Broadway directly from college at Oklahoma University with a show some of you may remember, Tuck Everlasting. However, Tuck couldn’t stay afloat during that time and Kropp was left to fend for herself at the tender age of 23. “I had a lot of odd jobs, I worked as a telemarketer. " (That was a very short term thing, she laughs.) "I worked at a stationary store, but when I came here I had a lot of auditions, my agents were really, really on it. I was really lucky. I didn’t have to go through Back Stage," she continues, "but I was contacting everyone I knew here, saying - hey I’m available, what do you need. I was lucky, but it was a lot of hard work, too.”

She hit the ground running, she worked hard, taking classes and auditioning and was cast in a series of shows. Her first successful Broadway show was On the Town, which she remembers fondly. “I learned a lot, being a part of that rehearsal process, the tech rehearsal process and the previews, that was all something I’d never experienced before. It was a whirlwind. I was an understudy too and went on with very little rehearsal, a completely new thing for me. Up to this time, the most I’d ever run a show was a couple of months, we did On the Town for eight months, which was also a new experience.”

CATS has been at The Neil Simon for about a year now, so I asked Kropp how being a seasoned Broadway performer differs from her earliest days on The Great White Way. Kropp responded thoughtfully: “It’s an amazing experience, certainly, I’m loving it. But Broadway is not as glamorous as people think it is -- which never scared me at all, I love the work. However, I don’t think folks realize how much energy it really takes to do eight shows a week. Plus, maintaining yourself so you can give your best each and every night. Whether it’s physical therapy or acupuncture, whatever you do, you make that happen so that you can just do your job as well as possible. So, it seems like we’re only working, like two or three hours a day, but in reality, we’re working 24/7, it never stops. When you go home, you’re working out or eating right or steaming your voice, if it feels “off.” There’s a lot of stuff that goes on behind the scenes that most folks probably don’t think about. Also, pacing yourself for a long weekend of performances.” (CATS currently has two shows Saturday and two shows Sunday as well, which constitutes a long weekend of dancing and singing for the entire cast.) “That for me, was one of the biggest things, your performance energy is up and down during the course of the evening so, that was big for me too, to learn to pace myself.”

The role Kropp is currently dancing every night has been re-imagined for her, by none other than the estimable Mr. Andy Blankenbuehler, whose long standing work as a choreographer has all of Broadway aglow with his bold, modern approach to storytelling through dance. His hip-hop creations have revolutionized “Hamilton” and when he spotted Kropp, he grabbed her for this revival of CATS. So, I asked Kropp how she and Andy began to create this comic, tap dancing Jennyanydots, and how she dealt with the new addition to the show. “Well, I don’t really think of myself as the typical CATS dancer, they are all so amazingly talented. I was certain I wouldn’t get cast in the show at all. I really see myself more as a “revival” girl. I had mentioned to a friend of mine that she’d be perfect for Jennyanydots, but then they brought me in and I guess I felt a bit out of place? So, I was 23 and had just gotten off of Dames at Sea playing a young ingénue, but Andy had a different idea for this part, and we did a little tap combo at the audition and, frankly after it was over, I was so confused! I honestly didn’t think I’d get cast. Then, I got the call and I just sat there. I didn’t call anybody, I was so surprised. I sat there thinking...life is so weird. And kind of amazing. But life is so weird.” When I marveled at the spectacularly beautiful tap shoes she wears during her heart-stopping tap number, she laughed at my amazement and replied, “The number is so very fun and sparkly and just the opposite of what I thought it would be. It’s quintessential Broadway and really, really fun.”

As for dream roles in the future, Kropp would love to do “Kathy” in Singing in the Rain because she says, “she’s not your typical ingénue, which is something that I always look for. All these old movie musicals, I just love them, I can’t get enough. Every time I watch them I think about the effort they put into those musical numbers, it is just astounding and thrilling to me. They worked really hard.”

For now, though, Broadway has a shiny new star, tapping our troubles away each night as Jennyanydots in CATS at the Neil Simon Theater. Empty your kitty and get tickets for this dazzling production. Ms. Eloise Kropp is undeniably the cat’s meow.

In Manhattan at Cats

In a world that trades in nostalgia and where everything old is new again, it makes sense to see Andrew Lloyd Webber’s Cats come back to Broadway. The show ran in New York from 1982 to 2000 shattering records and amassing equal amounts of adoration and disdain; for every person who worships at its furry altar, there is someone who is so allergic to the show that not even all of the world’s Zyrtec could make them immune. Fans of the musical will be happy to learn that very little has been altered from the production they grew up loving, and new audience members will be either perplexed or rejoiced at the fact that they will be able to experience almost the same show people saw more than 30 years ago. What’s surprising is that for all of its familiarity, the show’s sincerity makes it unexpectedly relevant in terms of sociopolitical content. It’s simply the perfect musical for 2016. Those who found it aesthetically objectionable in 1982 will cringe at the idea of more of the same leotards, leg warmers and excessive makeup, after all John Napier is back as scenic and costume designer. But in his by the numbers throwback Napier has perfectly captured hipster culture with their idea of f …Read more