Tony Award winner Ted Sperling has lent his musical talents to Broadway productions like The Light in the Piazza, Ragtime, and the most recent revivals of My Fair Lady, Fiddler on the Roof, and The King and I. He's also the Artistic Director of MasterVoices and has served as music director for countless concerts featuring symphonies, opera singers, and Broadway stars.

Now, he's helming a new concert series: Broadway Stories & Songs w/Ted Sperling. Kicking off May 7th, the series will feature Sperling in song and conversation with Broadway talents Betsy Wolfe, Jose Llana, Elizabeth Stanley, Jason Danieley, Victoria Clark, Meghan Picerno and John Riddle. Ahead of the series' first installment, we spoke with Sperling about what a Broadway music director does, what he learned from Sondheim, and why this concert series will be different from any other.

Where did the idea for this concert series come from?

Very early on in the pandemic, I participated in an event called Music Never Sleeps NYC with Jan Vogler. Then over the winter, Jan called me and said he had decided to invest a lot of time and money in a very high-quality platform for online music, called DREAMSTAGE. He explained that they had six remotely operated video cameras, so they were set up to be safe with COVID protocols, but also to create a beautiful finished product, with high-fidelity sound. And he asked if I might be interested in putting together the Broadway channel on his platform.

I thought it would be a great opportunity to actually make music again, because while I've been able to do remote things this past year, I miss the spontaneity of reacting to someone in the same room. So we designed this concert series to be very intimate. It’s just me and a singer. And we decided that since I know these people well, we would share our stories. It would be an evening that wasn’t just a formal concert, but more intimate, like a peek behind the curtain.

How did you choose the performers and songs?

I wanted people that I had some connection to, friends that I’d done projects with in the past. So by and large that’s what this project is. It’s people at the top of their form with whom I can share stories and experiences.

In terms of the material we chose for these concerts, it’s very personal and varied. We decided not to just go with Broadway hits or songs by one person. We tried to mix it up. Certainly we’re doing signature songs that these people are known for. For example, with Betsy we’re definitely doing a beautiful song from Waitress, with Elizabeth from Jagged Little Pill, and Victoria from Light in the Piazza. But we’re also  going to give you an unexpected treat: something you wouldn’t expect them to sing necessarily. I’m also doing a little duetting with them here and there, which is fun.

Not to put you on the spot, but as a teaser for the series, can you think of a behind-the-scenes story from your time on Broadway?

Betsy and I were planning to do a song from Into the Woods and then we decided it just didn’t fit into our program. But I was telling her about some of my experiences on the original production of Into the Woods. I actually worked on the show before it even went into rehearsal doing music copying. This was before people did music notation on computers, personal computers didn’t really exist yet. So I was taking Sondheim’s handwritten pencil sketches and putting them in ink. Everything had to be done by hand and you wanted to make it very beautiful and legible, so it was a very painstaking process.

I was sent to deliver my work to him one day and was lucky that he was in a talkative mode. I knew he was in the early stages of writing this new show and I was so excited to learn all I could about it. He said it was a scary moment because he was just finishing the opening number and was hoping that he’d found the right vocabulary for the show.

One of the things I most admire about Sondheim is that, while you can always tell it’s a Sondheim song, you can’t just swap songs from show to show. Each show has its very own particular flavor. Clearly he thinks a lot about what the vocabulary is going to be for each specific project and then lets that guide him.

So he said, "I’m choosing the vocabulary for this show and it’s scary because I’m afraid I might make a mistake, go down the wrong path." And I said, "Knowing your shows, I wouldn’t think you’ve ever gone down the wrong path. Have you ever made a mistake that way?" And he said, "Yes, on my very first show, Forum, I wrote half the score and had to throw it all out because it was the completely wrong tone, and it took me that long to figure it out."

And the end of the story is that I went on to play this show on Broadway. I wasn’t the regular keyboard player but I did sub on it a lot, and the most memorable part of playing that show was that I provided the sound for the cow’s burps. You don’t often think of playing a Sondheim show and making cow burping sounds, but that was a big part of that experience for me.

I wanted to ask you a couple questions about your work as a music director. Obviously you’ve done a lot of that and you have a very impressive resume. What’s something a Broadway music director does that might surprise people?

I do think at some level, everyone expects the music director to be the person they’re watching conducting. But I’ve actually been the music director for shows and hired a separate conductor because for that specific show I thought it was more important for me to be in the audience listening than in the pit conducting.

Another thing is, if you’re doing a revival, often these days you have to reshape it because the production is so different from the original that it may need a lot of new music. I've worked quite a few times with Des McAnuff, for example, and when I do a show with him we create a lot of new music that brings people on and off stage, that brings scenery on and off stage, that punctuates a mood, that changes a mood. That’s a really fun, on-the-spot process because he actually says, “How about if we had some music here?” And he expects it to magically materialize right in the moment. It's a fun challenge to say, "Well, how about this?" And if it’s not the right thing, we come up with something else.

Then there’s making the cast feel at their best so they can deliver. It’s all on your shoulders to make sure all those things come together and that you’re preparing the actor in his or her terms.

And you’ve done a little acting yourself. Do you feel like that helps you connect better with the artists?

Yes, and I think it’s helped me grow as an artist myself. I’ve only done a couple of acting jobs, but I did the very first one, which was Titanic, very specifically to put myself in the shoes of the actor. I wanted to learn what it’s like to be on the spot like that and facing the audience and taking direction, and what direction was going to be helpful for me as an actor in that situation.

Obviously, we all hope live theatre will be returning soon. When it does, what are you most looking forward to?

I would like to work on a brand-new show that takes everything we’ve learned in this last year and puts it to good use. I’ve done a lot of revivals recently, and I’ve loved it. But I miss the puzzle making aspect of a new show. That group effort to find the best version of something is really thrilling for me.

Your first guest for this series is Betsy Wolfe. Can you tell us a little about how you two know each other?

We’ve done a lot of concertizing over the years, including with the New York Philharmonic. Recently we did a whole week of holiday concerts together with the San Diego Symphony. The most unusual thing we did was a brand-new musical on an island off the coast of Maine. You had to take an hour-long ferry just to get to the island, and the audience consisted wholly of people who were already there. That was a really unusual and fun and scary job for us.

I just love her performances. She has a brilliant voice. She’s a smart as a whip performer, so she’s full of ideas herself. Some people are very happy to turn decisions over to a music director, but then there are others who really want to wrestle with it and are full of their own ideas. And Betsy’s certainly in that second camp. Everybody that I’m doing these concerts with is like that. And I enjoy that, that back and forth. I think it’s going to be a great concert. 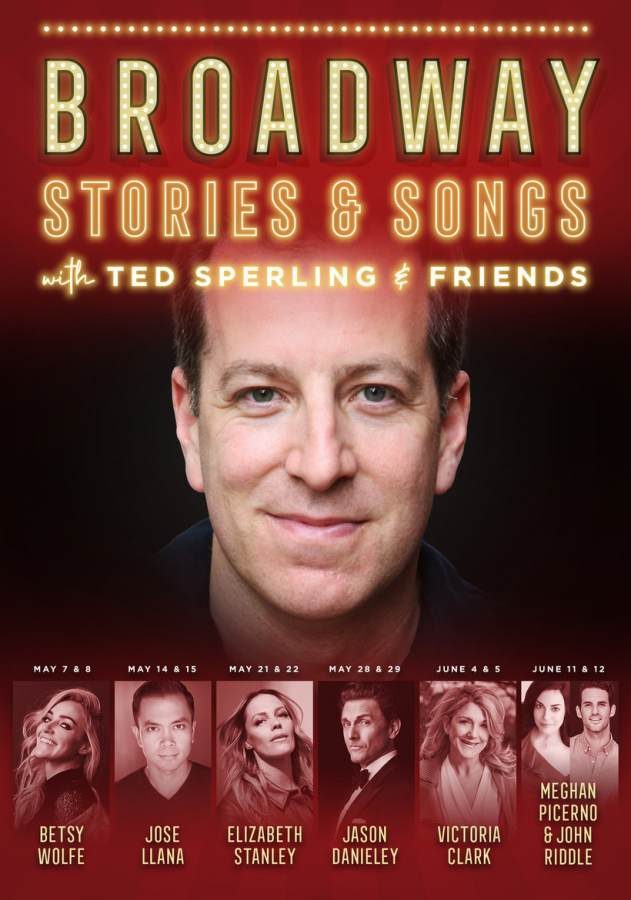 Broadway Stories & Songs will feature Ted Sperling in song and conversation with an exciting group of Broadway talents every Friday night at 8pm EST, thru June 11th, with a matinee 2nd stream each Saturday afternoon at 2pm EST. For tickets and more info, see:

What to Watch on BroadwayHD This October
Harry Hadden-Paton talks returning to Lincoln Cent...
BroadwayCon 2018: Steven Levenson, Noah Galvin, an...
5 Things We Learned At BroadwayCon’s ‘...