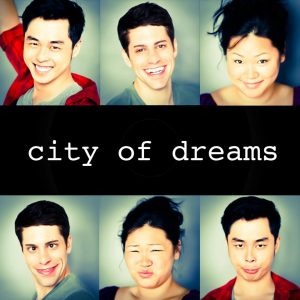 “City of Dreams” is a little web series about BIG DREAMS in the greatest city on earth -- and it now features the talents of some major Broadway stars.

In the series, Jamie (Justin Anthony Long), Julie (Jee Young Han), and Julian (Jonathan Lee) struggle to make their Broadway dreams come true.  What started as just a passion project for this trio as an outlet to showcase their work has recently attracted the attention of award-winning Broadway stars and creatives including "Kinky Boots" Tony Award winner Billy Porter and "Cinderella" two-time Tony nominee Laura Osnes.  The two make guest appearances in the two-part season finale of Season 1.

In the pilot we meet the trio at their friend's annual "Gay-b-cue".  Backed against the wall by a slew of showy actors asking the dreaded question "What are you working on?", they make up a lie that they are developing a musical titled "The Ballad of Ofaginia".  Throughout the series, the three struggling artists have to figure out how to write, cast, and produce a new musical -- and their journey is filled with creative dilemmas, financial difficulties, and performance problems.  Original music for the series is written by singer, songwriter, and actress Joanna Burns, who also plays the stage manager for the production of "Ofaginia".

Watch Billy Porter gives Julie some star advice in the clip below: