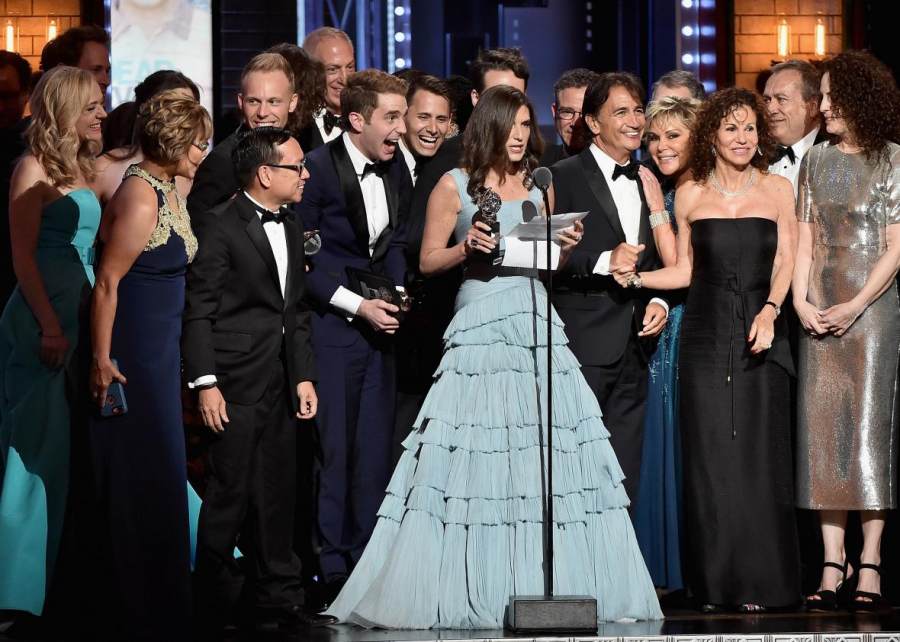 The Tonys offer the perfect opportunity to celebrate Broadway and all the wonderful art that it offers throughout the year. We put together our top ten favorite moments from this year’s Tony Awards:

One of the best parts of any awards show is the red carpet. This year, the Tonys started off with some incredible looks. Rachel Bay Jones (of Dear Evan Hansen) rocked her beautiful blue dress, and Denée Benton (star of Natasha, Pierre & the Great Comet of 1812) looked like a fairy princess in her elegant green ensemble.

9: Rebecca Taichman’s Win as Best Direction of a Play

Rebecca Taichman won the award for Indecent, playwright Paula Vogel’s Broadway debut. That her debut on Broadway, as well as fellow celebrated playwright Lynn Nottage’s, comes so late in a glowing career has brought forth commentary on Broadway’s treatment of women. That the vast majority of artists recognized on Broadway are men extends to directors as well. Taichman is the fifth woman to ever win the Tony for Best Direction of a Play, definitely making it a moment worth celebrating!

The mini pies sold at intermission during Waitress are probably the cutest things ever, so seeing Sara Bareilles herself hand them out during one of the show’s funnier bits, in which various stars interrupt the proceedings to shamelessly plug their shows, was a dream come true (if only we could have had some…).

7: Come From Away Kicking off the Show

In creating a heartwarming musical about 9/11, Come From Away has achieved something truly unique and remarkable. It kicked off the Tonys with the first performance of the show, and its beautiful opening number set a high bar for the rest of the night.

The Tonys are held in the Rockettes’ home at Radio City Music Hall, so of course it was wonderful to see them perform! Cynthia Erivo and Leslie Odom Jr. singing “New York, New York” during the performance didn’t hurt either.

The former second lady stole the show when she received a standing ovation before introducing Bandstand, which tells the story of a band of veterans adjusting to post-war life through a swing band competition. In her speech, Biden expressed her support for Got Your 6, an organization that gives veterans the resources they need upon their return from military service.

The evening was a star-studded affair, with appearances from Tina Fey, Scarlett Johansson, Stephen Colbert, and more, but Josh Gad stood out with his hilarious presentation. He teased his role in a revival of A Funny Thing Happened on the Way to the Forum coming to Broadway next year, an announcement met with cheers from the audience. Of course, he then revealed it was all a lie – something he’s quite good at since his acting training days at Carnegie Mellon. Our hearts are still a little broken that it’s not really happening, but he was too funny to fault.

Given the way they’ve redesigned the whole theater to bring its intimate, immersive show to its big new home on Broadway, Great Comet offers a truly unique experience. We got to see some of that in its mashup of Josh Groban’s big number “Dust and Ashes” and rousing ensemble number “The Abduction,” giving us a taste of the show’s inimitable staging. They even brought the chandelier that serves as the show’s titular comet!

It was heartwarming to see so many of the presenters and winners talk about the importance of supporting its artistic community, and those trying to join it. As Kevin Kline said when accepting his award for Best Lead Actor in a Play, “I would like to thank a couple of organizations, without whom probably half of the people in this room would not be here. That would be the National Endowment for the Arts and the National Endowment for the Humanities. Thank you.” Rachel Harry, who teaches at Hood River Valley High School in Oregon, was presented with this year’s Excellence in Theatre Education Award.

After the infamous snafu at this year’s Oscars, the envelope naming the winner of this year’s Best Musical had the best protection around: Frank Underwood (played by host Kevin Spacey) walked out with his wife Claire (Robin Wright) to give presenter Lin-Manuel Miranda the envelope. He even worked in an improvised dig at Bette Midler’s acceptance speech (which outlasted the music trying to play her off): “I want to get out of here before Bette Midler thanks anyone else.”

Check out the full list of last night’s winners:

Best Direction of a Musical
Christopher Ashley, Come From Away

Best Performance by a Leading Actress in a Musical
Bette Midler, Hello, Dolly!

Best Performance by a Featured Actress in a Musical

Best Performance by a Featured Actor in a Musical
Gavin Creel, Hello, Dolly!

Best Revival of a Play
Jitney

Best Scenic Design in a Play
Nigel Hook, The Play That Goes Wrong

Best Performance by a Leading Actor in a Play

Best Performance by a Featured Actor in a Play
Michael Aronov, Oslo

Best Performance by a Leading Actress in a Play
Laurie Metcalf, A Doll’s House Part 2

Best Performance by a Featured Actress in a Play
Cynthia Nixon, Lillian Hellman’s The Little Foxes

Our Favorite Looks from the 2017 Tonys Red Carpet
Review: Best Musical Nominees Perform at the Tonys
Tony Awards 2017: What Themes Do This Year’s...
A Recap of the 2018 Tony Awards