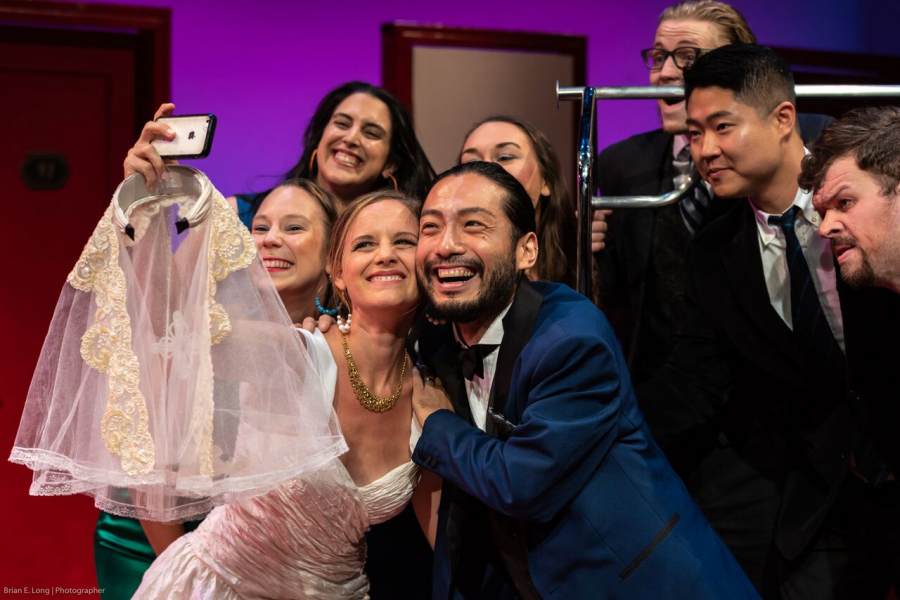 In the program notes to the Dell'Arte Opera Ensemble's production of Don Giovanni, director Owen Horsley mentions the #MeToo movement, and Mozart's opera about the legendary seducer certainly takes on a new significance in a society replete with claims of sexual harassment. Accordingly, Horsley has relocated the opera's setting from 17th century Spain to the present day, in an unspecified location that features an endlessly rearranging set of red hotel doors. Leporello's list of women his master has seduced becomes a collection of printed head shots, a startling reminder that Don Giovanni's "victims" are more than simply names. In another clever updating, Don Giovanni's insatiable appetite is aptly symbolized in the ten pizza boxes Leporello serves to him in the opera's final scene.

This production of Don Giovanni, hosted at La MaMa's Ellen Stuart Theatre, favors the opera's comic elements over its darker, more troubling themes, though the endings of both acts successfully (and very quickly) conjure up a storm. Don Giovanni (played on alternating nights by Eric Lindsey and Cole Grissom) may lose some of his tragic impact as a character, but the opera's more comic characters -- notably Leporello, Zerlina, and Masetto -- have ample opportunity to shine.

An alternating cast splits six performances; I saw Eric Lindsey in the title role. As the young bride Zerlina, Elyse Kakacek nearly ran away with the opera, but two things stopped her: Jenny Lindsey's gorgeous aria ("Non mi dir") as Donna Anna in Act II, and a number of forceful performances from Jessica Mirshak as the stubborn Donna Elvira. In fact, it's the female characters who seem truly in control of this Don Giovanni. Zerlina's Act I aria "Batti, batti, o bel Masetto" is a tour de force, and her strong acting and vocals are one of the production's highlights.

Jenny Lindsey's Donna Anna is a less dynamic character, but if I had any reservations, the scene in which she opens her heart to her lover Don Ottavio quickly obliterated them. Soaring on rich, beautifully managed vocals, Lindsey breathes new life into a character that seems static for much of the opera, and in unfolding Donna Anna's loving but wounded heart, adds yet another layer to the various depictions of love present in this production.

Meanwhile, Jonathan Harris' Leporello -- Don Giovanni's hapless servant -- ushers the production in on a comic note and keeps it up more or less until the very end in a delightful, comically compelling performance.

While the final scene, with its glimpse into Hell (in this production, a locked hotel door carrying a Do Not Disturb sign) retains much of its power, this production is less concerned with Don Giovanni's perdition than it is with the people around him and how they react to his atrocious behavior. At various moments, Leporello is stunned, Elvira is indignant, Anna is vengeful, and Don Ottavio is simply confused. In a production of Don Giovanni that directly channels #MeToo, the focus on society's varying reactions is probably no accident -- and it's well played.

For more information on the Dell'Arte Opera Ensemble visit: