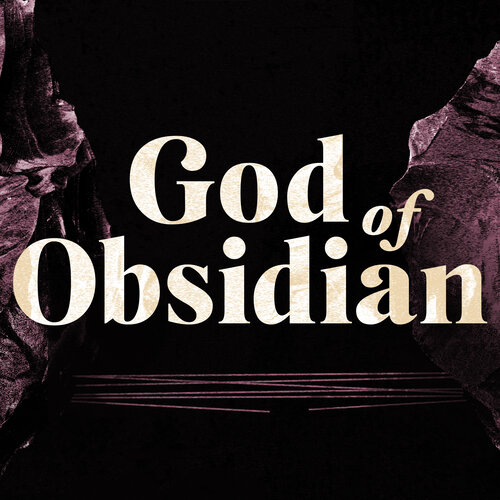 When Alice first sees the bridge leading to Nathan's house, she thinks she's stepped into a Grimm's fairy tale. Rickety and covered in vines, it looks like an illustration straight out of Hansel and Gretel, or maybe Little Red Riding Hood.

Despite the rickety bridge, Alice thinks she's found the perfect guy. Even his house seems like a paradise: secluded in the woods, huge and full of empty rooms. Time seems to pass differently there. The days go quickly, and amid the beauty of the woods, another season has come and gone before you know it.

But something's a little off. After a while, it becomes clear that Nathan doesn't want Alice to leave. He pays all her expenses so she can quit her job and stay home, doing whatever she wants. Except he doesn't seem to want her to do much of anything. And then there's the trunk Alice isn't supposed to open.

And so the groundwork is laid for God of Obsidian, Mac Rogers' audio drama about a manipulative relationship. Directed by Jordana Williams, the miniseries (told in three 20-30 minute episodes) originates from a stage play performed at the 2017 Cincinnati Fringe Festival.

But while the setup is promising, portending a dark tale about secrets and romantic obsession with undertones a la the Brothers Grimm, God of Obsidian doesn't quite live up to that promise. Towards the end of the drama, Alice (played by Rebecca Comtois) jokes that the corpse of Nathan's former girlfriend is inside the trunk she's not supposed to open. While that would have been predictable, it would at least have been more exciting than what's actually inside the trunk. In fact, the story ends on a note that feels anything but climactic. I was hoping for some kind of M. Night Shyamalan reveal, but it never came.

While the ending may have had me scratching my head a little, God of Obsidian is still a worthy piece of theatre, or in this case, audio drama. As a psychological dramatization of the stages in a gaslighting relationship, it's both convincing and unnerving. As Nathan, Mac Rogers quickly moves from cute to infuriating, and while it's abundantly clear to everyone but Alice that she's being manipulated, Rebecca Comtois gives a subtly powerful performance as the unfortunate victim of her partner's need to control someone.

Throughout the drama, God of Obsidian keeps up a dreamlike, or perhaps nightmarish, mood. We're not certain what's true, how much time has passed since the last scene, or even what season it is. Like Alice, we're caught in a strange fairy tale that's turning out to be more like the original, uncensored Brothers Grimm and less like the Disney-fied version of events. The only thing that is clear is that everything is being twisted out of control--much like the vines gripping the bridge to Nathan's house in a clawing, contorted embrace.

God of Obsidian premieres in three parts on August 27, September 3, and September 10 across all major podcast platforms. For more info, visit:

Review of ‘Give Me Away’
In engrossing audio play ‘The Earth Moves,&#...
Multi-season science fiction epic ‘Give Me A...
Review of ‘Chance’ on the Open-Door Pl...