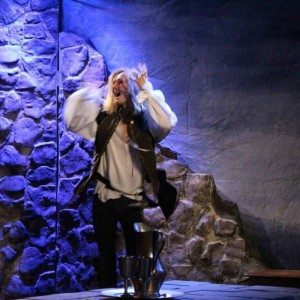 The compilers of Shakespeare's First Folio wrote in their introduction that the Bard hardly ever blotted a line. The claim received a famous rejoinder from Ben Johnson: "Would that he had blotted a thousand." Nu-Ance Theatre's production of Hamlet, running unabridged, and at over four hours with two intermissions, is a very good case study in how even Shakespeare's writings benefit from the usual judicious edits. But beyond the runtime, the production stands on solid legs.

We all know the particulars. Something's rotten in the state of Denmark. The prince wears the trappings and the suits of woe following his father's death and his mother's quick marriage to his uncle, Claudius. Thankfully, the spirit of dear old dad, here a neat, modified Pepper's Ghost projection, comes to give his life purpose -- "Avenge me," it says. In answer to the charge Hamlet prevaricates, stalls and plays the loon, thinking too precisely on the event. Here, as always, it's fun to watch him play for time.

Jack Wink's Hamlet has Hanson brother hair, a wispy frame and a wry wit. Of all the Danes I've seen, his snide asides make him a standout even if his angst at his uncle (a grandiloquent but often affecting turn by Jürgen Jones) feels couched in a familiar derision for a stepdad, especially when he talks about his nightly wassailing. Of course, Hamlet's predicament is singular and the emphasis on his arc, and that of all around him, makes this staging unique. Steeped in the Meisner technique, the cast, under the direction of John DeSotelle, react to one another with vitality and, when they lock eyes on the audience doing their soliloquies, they bring an immediacy to the centuries old verse, especially in the chapel scene when Claudius kneels to pray and Hamlet nearly strikes.

Though the method (which has its madness in it) is a newer innovation, the stagecraft of Matthew Imhoff has that 16th-century touch. An octagonal thrust places us in a turret in Elsinore with weathered stone and drawbridge door leading to a dark maw of a corridor. Hamlet and confreres remain the "glass of fashion" with Sarah Dixey's costumes, smart-looking doublets and lush dresses for Ophelia (a heartbreaking Julia Boyes) and Gertrude (Mickey Pantano, who plays it stately till she unravels in her closet).

Say what you will of Shakespeare's pacing -- I found my mind wandering during an overlong speech about a French fencer -- by the time I reached the final bout between Laertes (Ethan Russell, who comes back in Act IV with a bang) and Hamlet I felt the catharsis coming on strong. There's something to be said for a long buildup.