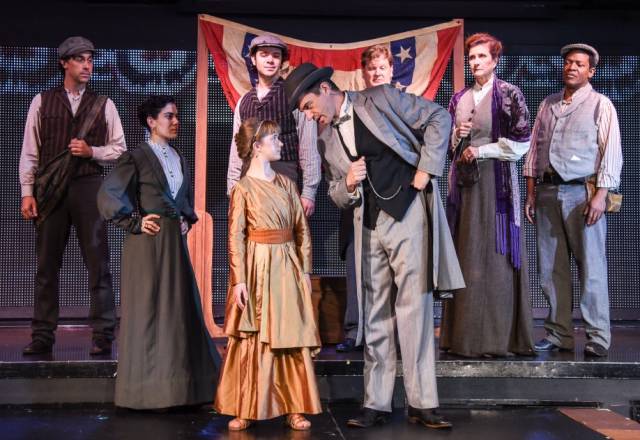 In Liberty (presented at 42West), the Statue of Liberty sails from France to America in 1885. There she lingers in a sort of limbo as Americans finish raising money for the pedestal on which she will stand. Onstage the statue is a moving, breathing human figure: the “child” of designer Frédéric August Bartholdi (Ryan Duncan). Portraying “Liberty” is Abigail Shapiro, a poised and vocally proficient performer in her early teens.

Clearly created with young people in mind, the 80-minute-long show (book and lyrics by Dana Leslie Goldstein, music by Jon Goldstein, and direction by Evan Pappas) is largely about the discouragement and discrimination that immigrants faced at the time of the statue’s arrival—and still face today. Opposition to the influx of foreigners comes primarily from Francis A. Walker, a character based on the real-life economist, whose reasons for restricting immigration seem patently bigoted today. Brandon Andrus plays Walker as a haughty snob, an antagonist to the much more immigrant-friendly poet Emma Lazarus (Emma Rosenthal) and publisher Joseph Pulitzer (Mark Aldrich). Eight cast members portray a variety of immigrants and other characters. Providing additional points of view are the characters Samuel Ferguson (C. Mingo Long), an African-American, and James Goodleaf (Duncan), a Native American.

The show’s pop-oriented songs are serviceable but not innovative or particularly tuneful. Some numbers, especially the more anthemic ones, are sung with ringing fervor. But most sound a lot like dozens of other contemporary musical-theater songs. The best and wittiest number is “We Had It Worse,” in which two immigrants—an Irish man (Aldrich) and a Russian Jewish woman (the amusing Tina Stafford)—engage in what might be called a bout of “one-downs-manship.” Doing the score (and Jeffrey Lodin’s arrangements) no big favors is the fact that it is presented as a recorded soundtrack, against which the performers sing live. The recording’s synthetic sound has all the nuance of a calliope. Mightn’t it have been smarter to have hired a live pianist/keyboardist (and perhaps a percussionist), who could have given the score a more organic feel?

Colin Doyle’s projections—providing backdrops from Liberty Island and vicinity—are also problematic. The idea was good, but the images have a dotty, pixelated effect that seems at times to do strange things to the faces of the performers downstage.

The libretto is probably the show’s strongest aspect. Although Liberty seems a little heavy-handed at times in the heart-on-sleeve way it wears its pro-immigrant sentiments, the story clearly drew in most of the adults and kids who saw it with me at one of two July 4 matinees.

Why the producers decided to cast such a youthful performer in the title role isn’t clear. Perhaps it was to add appeal for juvenile audiences. Or maybe it was to show that the notion of liberty had some growing up to do back in the mid-1880s. Still, it seems slightly odd that the “New Colossus” is embodied by such a young, small-framed person.

I admit to experiencing a patriotic twinge when Liberty finally stood atop her pedestal and held her torch aloft. I only wish that costume designer Deborah Hobson had provided her with a spiky crown, to finish the look.