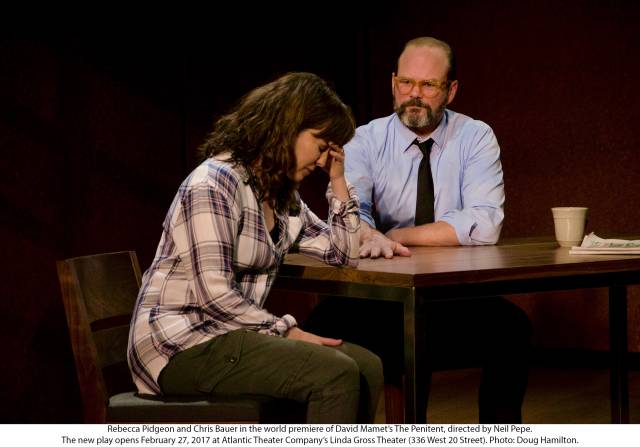 In David Mamet’s The Penitent, making its Off-Broadway debut at St. Peter’s Episcopal Church turned Linda Gross Theater, one of the two theaters run by Atlantic Theater Company (co-founded in 1985 by David Mamet, William H. Macy and thirty of their drama students), Mamet Speak grinds its molars on religion, the press and the Hippocratic Oath.

Charles (Chris Bauer), a psychiatrist, refuses to testify on behalf of a former patient (referred to as “the boy”) who has committed mass murder in a shooting rampage. The boy, whom the audience only hears about, asserts that this is because he is gay, and Charles, who has rediscovered his Jewish faith, is being discriminatory. Charles denies this, explaining to his wife Kath (Rebecca Pidgeon) that a recent article misprint of an essay title he wrote years ago, resulting in “Homosexuality as an Adaptation” becoming "Homosexuality as an Aberration", is to blame. For the run of the play, Charles, at risk of losing his career and marriage, debates and quarrels principles and his aversion to an “inquisition” with Kath, an unnamed defense attorney (Lawrence Gilliard Jr.) and his lawyer friend Richard (Jordan Lage). 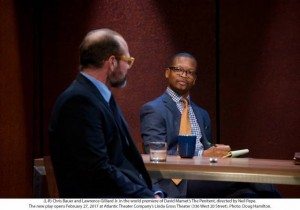 Director Neil Pepe has a tough job with characters that begin at a not too far away distance from where they end. It must be difficult to guide a cast whose job it is to act as a thin veil for Mamet’s temper. The dialogue -- that famous Mamet Speak that interrupts and overlaps and pauses at brief, measured counts -- comes to life only hastily, in particular during the one scene in which Gilliard Jr. and Bauer (both of whom were in The Wire) appear together, but from Pidgeon’s mouth, it may as well be Morse Code. The word “fucking” as an adjective has never sounded so discordant. Mrs Mamet places such emphasis on her disjointed delivery that her character can at best be described as “wilting”. Luckily for Lage, Richard’s segue into clichéd territory is only talked about.

Tim Mackabee’s plain, paneled set, more than capable of imagining a fourth wall, is let down by Mamet pushing it ajar so that a disconnect is present for much of The Penitent's 90 minutes. Turning the tables (as the cast do quite literally with their table prop between scenes) on victim and aggressor falls flat at the big reveal, exposing Mamet’s contempt for…well, a great many institutions. Charles has lost faith in so many of them, his own profession certainly. His misery is too tangled for palpable complexity. It is also infectious. As with Mamet's last few plays, the wicked, sharp mischief that made him such a success is absent here. Where are the great works, and where is that murdering boy patient when you need him?

Review: On The Shore of the Wide World
Review of ‘The Last of the Love Letters̵...
Review: ‘Three Billboards’ Director Ma...
Review: Irish Rep’s ‘Disco Pigs’