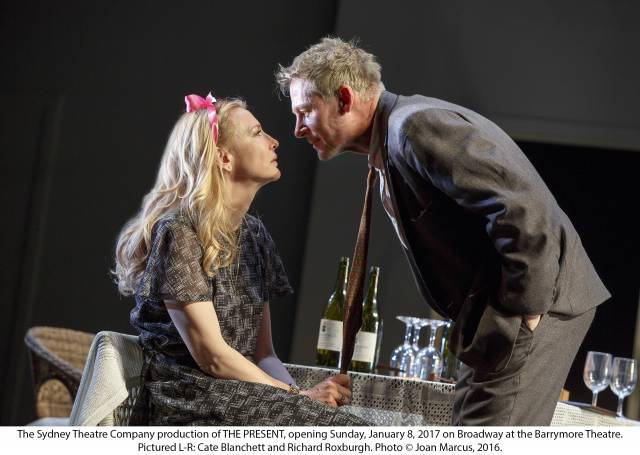 The luminous Cate Blanchett gives a grand performance in the Sydney Theatre Company’s Broadway transplant, The Present, an adaptation of the Anton Chekhov play Platonov. In fact, the entire cast, a true ensemble, gives top-notch performances in the somewhat uneven, often funny, and overlong drama directed by John Crowley.

Blanchett plays Anna, a Russian widow celebrating her 40th birthday at the summer house of her deceased husband, the General. She has gathered a select assortment of party guests for the weekend to eat, drink and watch some fireworks, both figurative and literal. There’s her stepson, Sergei (Chris Ryan) and his new wife Sophia (Jacqueline McKenzie), his best friend Nikolai (Toby Schmitz), and their former tutor Mikhail (Richard Roxburgh) and his wife Sasha (Susan Prior), Nikolai’s sister. Nikolai and Sasha’s father, Ivan (Marshall Napier), is there purely to play the drunken old fool.

In addition to these old friends, Anna has also invited two elderly suitors, Yegor (David Downer) and Alexei (Martin Jacobs), friends of the General. Alexei’s sons, university student Dimitri (Brandon McClelland) and Paris DJ Kirill (Eamon Farren), also join the party. As it turns out, Anna is desperate for some income and these wealthy gentlemen might provide some assistance. The arrival of a mysterious man, Osip (Andrew Buchanan), might have something to do with helping Anna achieve that goal.

In addition to the banter and sparring that happens when people gather and drink together, there are multiple love triangles driving the plot of The Present. Some involve Anna, some involve Mikhail; the presence of Nikolai’s young, hot girlfriend Maria (Anna Bamford) definitely doesn’t help deter the lust in the air. It appears that Anna is irresistible as the enigmatic hostess, the object of these young and old men’s desire since she was a young bride married to the aging General. Of course, as it happens in these classic Russian plays, she is also bored, lonely, and terrified of getting older.

The adaptation, by Andrew Upton, is modernized and features songs by The Clash between acts. This means that the language is somewhat simplified for a smoother interpretation. However, with four acts clocking in at just under three hours, its length is The Present’s downfall. It could have easily (and more imaginatively) ended after the third act, when Mikhail’s watch reminds him of a certain rendezvous. It would have ended on a cliffhanger instead of the melodrama that ensued.

The title of the play refers to a birthday gift given to Anna by Sergei, a pistol that belonged to the General and that, true to Chekhov’s words, goes off by the end of the play. However, the title is also a reference to the present, as in now. There’s a lot of allusion to the fleeting nature of time and being thankful for what you have now before it slips away, especially love. It’s as though Chekhov is saying, hold on to the one you love, because they can be taken from you in an instant.