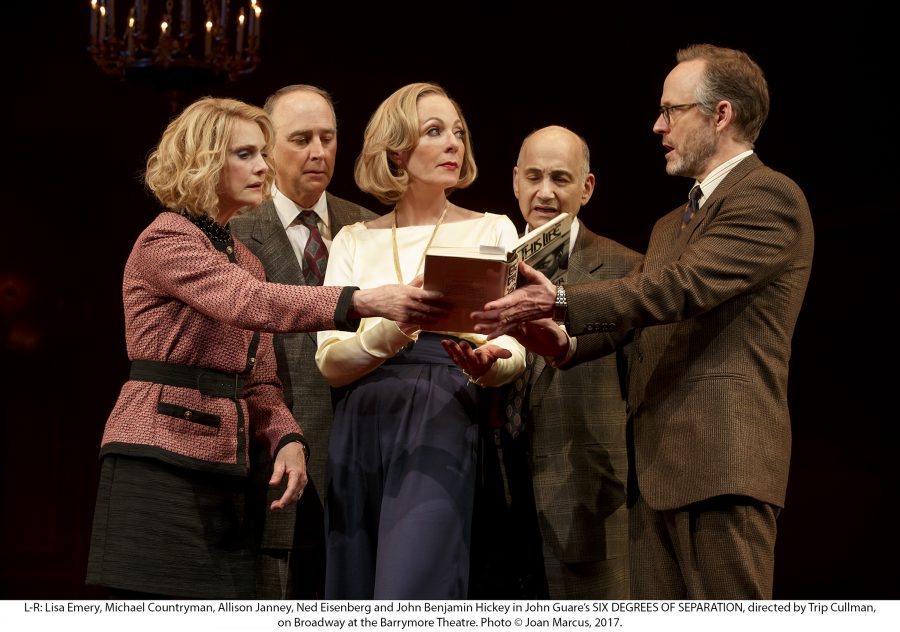 Most of us have played Six Degrees of Kevin Bacon, the game where you challenge someone to connect any actor to Kevin Bacon using only four other actors. The larger theory presented in the well-crafted revival of John Guare’s 1991 dramedy Six Degrees of Separation is that every person on earth is actually connected to everyone else through six other people. “But to find the right six people,” muses Allison Janney’s character, Ouisa, there’s the rub.

Six Degrees of Separation doesn’t dwell too much on this concept, although a network of people does help to explain what happened one night in the Central Park facing apartment that empty nesters Ouisa and her art dealer husband, Flan (John Benjamin Hickey), share. Or does it?

A young man named Paul (Corey Hawkins) unexpectedly shows up bleeding, claiming he knows Ouisa and Flan’s children, with whom he goes to Harvard. He’s been mugged and all his money is gone. He is well-dressed and well-spoken, which impresses the well-heeled couple, who are in the middle of entertaining Geoffrey (Michael Siberry), a South African billionaire they are trying to ask (or trying not to ask) for an investment in a Cézanne. Paul gives details of their lives a stranger could not possibly know. He tells them he is Sidney Poitier’s son and his dad is coming to town to cast the movie adaptation of the musical Cats (for theatre snobs, much fun is made at the expense of this revelation). He could get them parts as extras.

Paul charms the three of them with his elegant cooking and his thoughtful thesis on The Catcher in the Rye and soon he ingratiates himself into their lives. But then Ouisa and Flan catch him in a compromising position and the spell is broken. When several other acquaintances come forward with their own tales of crossing paths with Paul, the story gets curiouser and curiouser. Who really is this kid?

Six Degrees of Separation grapples with this question. Is Paul really the Harvard educated son of one of the most celebrated black actors of our time or is he a con man who enjoys manipulating rich people? Is he the center of a wider conspiracy among their children, who all went to boarding school together, or is he helping a high school outcast enact a revenge fantasy? Did he actually do anything wrong, or illegal for that matter, or is it all just a series of misunderstandings?

Director Trip Cullman elicits fine performances from his entire cast, but two stand out as particularly well-calibrated. Janney is magical as the conflicted Ouisa. She imbues the character with heart and goes beyond the rich, white lady trope. She really connects with Paul, perhaps in a way she hasn’t with anyone else, even her own husband. Similarly, Hawkins inhabits Paul with a subtlety that belies an enigma. To maintain such a veneer that you can never tell what is truly lying underneath takes a skill that is breathtaking to watch. The product of these actors makes Six Degrees of Separation worthy of connecting to audiences again.